A team of astronomers have managed to figure out how the biggest and brightest explosions in the universe take place and why. 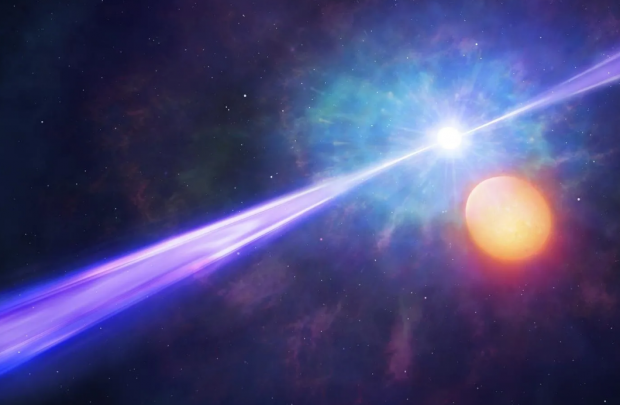 The explosions we are talking about here is gamma-ray bursts that are ejected from a star. These gamma-ray bursts have been recorded numerous times, but now scientists and astronomers have worked out why and how they are so bright and big. Researchers from the University of Warwick in the UK found that tidal effects such as the Moon's position next to Earth can cause this gigantic cosmic explosions.

The team of researchers examined thousands of simulated models of binary star systems, which are solar systems that have two stars caught in each others orbit. The examination led the researchers to believe that the orbiting of these stars can cause gamma-ray bursts to take place. When a star that's ten times bigger than our sun explodes it goes supernova and collapses either into a neutron star or a black hole.

What researchers found was that when the collapse is happening the star flattens into almost a disc but keeps its angular momentum. At the same time, the stars materials fall inwards towards the center and the previously mentioned momentum then shoots them out as a jet. The study also mentions another important factor - tidal effects of neighbouring stars. If a star was close to the one that was collapsing, its presence could keep the spin speed of the collapsing star at high rates which would then result in a large gamma-ray burst.

Lead author on the study, Ashley Chrimes, a PhD student at the University of Warwick Department of Physics said, "We found that the effect of a star's tides on its partner is stopping them from slowing down and, in some cases, it is spinning them up. They are stealing rotational energy from their companion, a consequence of which is that they then drift further away."