NASA is constantly working on getting humans to our Red Planet neighbor, but there is one big question that needs to be answered first -- where are they going to land and why? 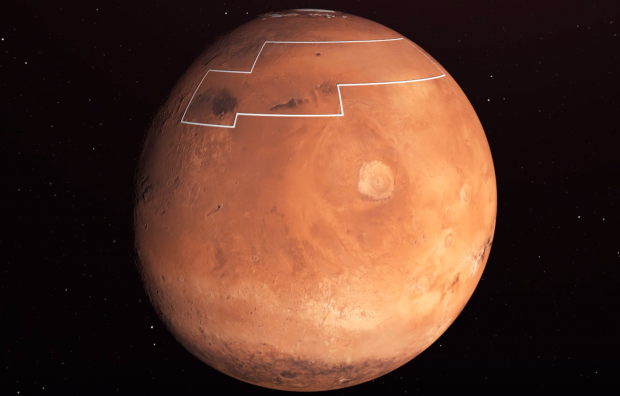 In a new paper published in Geophysical Research Letters, scientists managed to create a map through the analysis of satellite data (MRO & Mars Odyssey orbiter) that shows where martian water is located. This martian water is more accurately called 'water ice', and according to NASA's website, "Water ice will be a key consideration for any potential landing site". This is because if humans can harvest resources on Mars, they will have a steady means of fuel replacement and drinkable water.

Due to the air pressure on Mars being so thin, liquid water can't last on its surface for very long as it evaporates. This is why NASA has identified some key spots across the planet that have "buried treasure". This 'treasure' is, in fact, water ice and its located just under the martian surface. According to Sylvain Piqueux of NASA's Jet Propulsion Laboratory in Pasadena, California, "You wouldn't need a backhoe to dig up this ice. You could use a shovel. We're continuing to collect data on buried ice on Mars, zeroing in on the best places for astronauts to land."

Note: The above image shows an illustration of the region of Mars that holds water that would be easy for astronauts to harvest.