Right off the bat, we have the UpStream Video Capture Adapter, this device can capture high-quality audio/video up to 1080p at 60FPS. It connects to an HDMI-enabled camera and uses its USB-C cable to save the file to a device such as a laptop or PC. For the gamers out there that want a bit more bang for their buck, IOGEAR has the UpStream Game Capture Adapter which outputs video at 1080p at 60FPS but can pass-through a 4K 60FPS signal to a monitor.

Moving onto pro-level production quality gear now, IOGEAR has announced the UpStream 4K Game Capture Hub. The UpStream 4K Game Capture Hub is a multiport device that is equipped with two HDMI video inputs and a real-time HDMI program output. With this device, users will be able to seamlessly switch between viewing sources using the IOGEAR UpStream smartphone app. This device also has an RCA input and XLR input for some high-quality mics.

Finally, we have IOGEAR's prosumer device, the UpStream Pro Video Production Switch. Instead of me explaining to you what this one does, I'll let IOGEAR do it themselves with this quote:

"Featuring a compact mixer control panel with programmable buttons and UpStream Studio, an intuitive iPad app, users can easily edit their layout, switch between scenes, add image or text overlays, and adjust PIP settings in a simplified tap and swipe UI - all without the use of a computer."

So when will this all release? 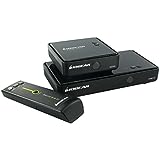