CES 2020 - CES 2020 is about to kick-off, and just like every year, there are product announcements that are head-turning. At the moment, Oral-B has my attention as the company has just announced its latest and greatest toothbrush, the iO. The company says that the iO is a result of six years of research and development and feedback from over 1,800 test users. So how does it compare to your standard toothbrush? The iO uses "oscillating, rotating movements" that is powered by "linear magnetic drive".

There is also a pressure sensor that gives users feedback on if they are not providing enough or are exerting too much cleaning pressure. Obviously, the specs of the toothbrush don't stop there, as it also has in-built artificial intelligence that gives real-time feedback on your current brush via the Oral-B iO app. This feedback will give users what Oral-B are calling real-time "tracking and coaching". 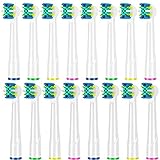