Just this past Friday, Uber announced new plans to acquire an ownership percentage of the company Cornershop, who is a leading grocery delivery service. Cornershop is currently leading in grocery deliveries in Chile and Mexico, and if the acquisition gets through the regulatory boards Uber could be moving into the grocery delivery business. According to Uber CEO, Dara Khosrowshahi, "Whether it's getting a ride, ordering food from your favorite restaurant, or soon, getting groceries delivered, we want Uber to be the operating system for your everyday life."

He continued and said "We're excited to partner with the team at Cornershop to scale their vision, and look forward to working with them to bring grocery delivery to millions of consumers on the Uber platform." Its possible that after the legals are finalized Uber will make an 'Uber Groceries' app that will directly compete with the likes of already established grocery delivery services Instacart, AmazonFresh, Walmart, and others. 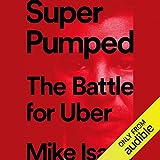 Super Pumped: The Battle for Uber