The Walking Dead is getting adapted into a big new survival-horror VR game complete with exploration, brutal combat, and crafting. 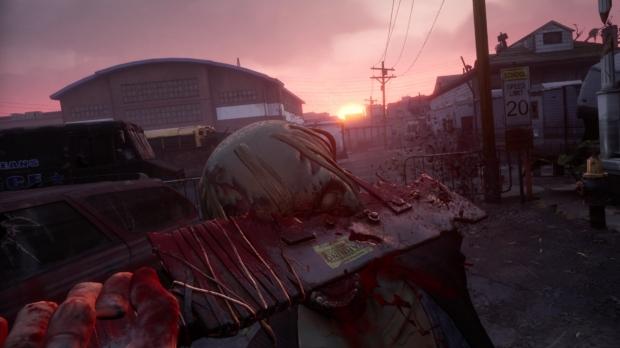 Today Skydance Interactive announced The Walking Dead: Saints and Sinners, a new VR game set in Robert Kirkman's terrifying zombie-infested world. Set for release in January 2020 on Oculus and Steam's VR platforms, Saints and Sinners sounds like an intuitive mix between Dying Light and Dead Island with a whole new layer of immersion and thrilling tension: gamers can grab zombies and decapitate them, slice and dice hordes of walkers, and interact with an explorable world.

The game will also have a surprising amount of reactivity and depth with a 15 hour+ campaign, showing Skydance is keen on reversing the downward trend with Walking Dead games. You'll get to wield all sorts of guns and shotguns (as well as bows) as you fight for survival in an undead-littered New Orleans, mowing down both humans and walkers alike. There's opportunities to help various NPCs littered throughout the game and every decision you make will not only shape the world, but it'll determine who you can team up with.

There's scavenging for parts, ammo, and materials, and crafting that makes use of everything you find. You'll be able to make new weapons with enhanced upgrades, too.

Perhaps the most interesting part of Saints and Sinners is how interactive the world is. Players can pick up nearby objects like chairs, pipes, and even rocks to smash up zombies with, recreating those iconic near-death moments in the show with high-stakes scrambling survival.

The Walking Dead: Saints and Sinners releases in January 2020 on Oculus and Steam VR platforms. Check below for a ton of info:

A first-person VR action game where players play as a hardened survivor traveling through a walker-infested, semi-flooded New Orleans. Players use an assortment of melee weapons like blades, axes, and ranged weaponry like bows, pistols, shotguns and machine guns to fend off the undead and the living alike. Combat is often close quarters, with blood and gore alongside decapitation and dismemberment as frequent sights. The environment often has dead bodies or blood visible in the area. During combat, the player may impale zombies in their heads and bodies with sharp objects, leaving their damaged corpses behind. The player is often put into moral dilemmas in which they may use violent action against initially non-hostile characters. Foul language and profanity happens frequently in dialogue.

Saints & Sinners is a game unlike any other in The Walking Dead universe. Every challenge you face and decision you make is driven by YOU. Fight the undead, scavenge through the flooded ruins of New Orleans, and face gut-wrenching choices for you and the other survivors. Live The Walking Dead's dark drama in your own skin.

Walkers define The Walking Dead world, and Saints & Sinners' VR puts you right alongside them. If you're not ready, just one of the undead can end you with one good bite. Train yourself to face the herds; walk among the dead or end them all.

The living are more dangerous than the dead, but you've got several ways to deal with them. Help those in need or take what you need by force. Fight alongside gangs to get some pay and get on their good side, or risk it all to fight against them. You decide who lives, who dies, and who turns.

You decide the kind of person you want to be. As you make your way through New Orleans, who you decide to help and hurt, and just how you decide to do it matters. In the end, it'll be your actions that decide if you're a Saint or Sinner.

A new way to live survival horror. Violence, disease, and famine as constant threats, that you must learn to cleverly navigate. Will you sneak around the ruined streets and creole mansions, scavenging all you can? Will you risk life and limb to protect those in need or will you gun down anyone who stands in your way and become known for your brutality among the survivors? The choice is yours.

One man's trash is another man's treasure, and for the keen eyed survivalist, there is plenty of treasure to go around. From the obvious gear like weapons and food to bottles, toys, and egg timers, no item is without use or utility. Be creative, be vigilant, and always come home with a new haul.

Those who do not have, must make. Anything you can fit in your backpack can be broken down into its base components to build even greater tools later. Gather recipes to make weapons, ammo, and other supplies for the long journey ahead.

Whatever works. It's always up to you to decide how to make it through each day. Fighting the Walkers and bandits you encounter and taking what you want is always an option, but it is also the most lethal one. Maybe you will use stealth tactics to avoid danger, or even hide among the dead by disguising yourself as them. Maybe a combination of everything is in order. Do whatever it takes.

New Orleans is at war. The living are not just fighting the dead, but also inflicting pain and brutality upon each other. As bodies pile up between warring factions, whispers spread of a long-lost mystery in the city that could turn the tide of the war. Will you try to court favor with the factions, or play them against each other for personal gain? Can you unravel the mystery that is behind it all? The fate of the city and its survivors rests in your hands.​

The Big Easy is anything but nowadays. With no one to care for it, flooding has split New Orleans into a series of concrete islands and Walker infested waves. From the Garden District to the Bywater, explore over 9 neighborhoods and learn about the city's fall and the lives lost along the way as you fight for what's left.

Two forces clash for the fate of New Orleans. The Tower, commanded by the authoritarian Mama, and the Reclaimed, led by the charismatic Jean-Baptiste. The Tower seeks total loyalty and a city under the rule of law; their law. The Reclaimed seek to live in a new world free of the rules of the past. They also practice ritualistic revenge on their path to justice. One promises safety and control, and the other promises freedom. Both have a price.

You're not alone on this journey, and the people you meet along the way will have just as much of an influence on you as you will on them. It's hard to build trust in this world, but survival is best achieved with allies. Will you keep your friends close throughout your journey, or find the perfect moment to stab them in the back?

A NEW VISION FOR VR

Crafting, exploration, freedom of choice and visceral combat make this a deep, 15+ hour game built for VR. Uncover its many secrets and cut down both the dead and the living with an arsenal of melee, ranged and makeshift weapons, all physics-based objects you can realistically wield. Scale the side of a building to ambush enemies from above, hold down a walker's head to rip your knife out of its skull or just convince some fools to take a bullet for you. Discover new, horrifying ways to survive and pursue your goals, then face the consequences.

Saints & Sinners takes physicality and motion into account with all your actions. Surrounded by Walkers with no weapons on hand? Grab a chair and fend them off as best as you can! Offer food to a starving survivor and they'll happily take it off your hands. Point a gun, and they'll step back in terror or get ready to fight back. A level of immersion unlike any other.

Every bullet slams with a satisfying pop. Every weapon slam is followed by a crunch that you don't just hear, but feel. This Walking Dead experience seeks to bring genuine momentum to every attack you make, turning every encounter into not just one of clever planning, but of physical effort to overcome your enemies.

Getting from point A to point B is not always as simple as it sounds. Environments in Saints & Sinners are designed so that vertical movement can be just as viable as horizontal movement. Crawl under buildings to hide just under the noses of the Walkers. Make a quick escape by leaping over a wall, or getting on top of an abandoned car. Climb up buildings to escape the dead and get into new locations. Just don't forget to mind the fall.