A new deal has been announced between legendary console creator Atari and Antstream to bring "thousands" of retro titles to the Atari VCS when it launches.

The new deal will be bring optimized and expanded versions of Antstream's Arcade game subscription service exclusively to the VCS when it debuts. Users that pick up Atari's new console will have access to Atari's own personal library of 300+ titles as well as "thousands" of more titles from other vintage platforms.

Not only does the Antstream service bring users a plethora of more games, but it also includes a global leaderboard ranking system, social challenges and support for the classic joystick and modern controllers. The service will be provided to players as a subscription that users can opt into, it will cost either $10 a month or $96 a year to access the massive library of games. For more information head on over to the official website here. 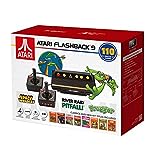