Medal of Honor is getting resurrected as a VR shooter, and it'll have an online multiplayer mode.

Respawn's new Oculus-exclusive VR project is actually a WWII-based Medal of Honor FPS, not Titanfall 3. The game is focusing strongly on immersion and interactivity with a historically-accurate singleplayer campaign, complete with multiple theaters of war across Europe. It's also quite funky and hilarious, too, letting gamers embrace the jank of VR by doing wacky things like catching grenades, climbing walls and shooting enemies, and other creative experimental combos.

EA's penchant for online engagement will drive its way into the new Medal of Honor VR game, too. We'll see a multiplayer mode tacked on, likely with some sort of monetization or maybe expansion content. From what we've seen of the gameplay, multiplayer actually sounds like tons of fun. There should be opportunities for crazy action across the board.

"Additionally, Medal of Honor: Above and Beyond will include unique multiplayer modes and features when it releases in Summer 2020. The game will lean into the franchise's history of education through entertainment, bringing the stories of WWII veterans to life for players in emotionally powerful ways," reads an EA press release.

The new Medal of Honor VR game will be exclusive to Oculus Rift headsets when it releases in Summer 2020. No pricing has been announced. 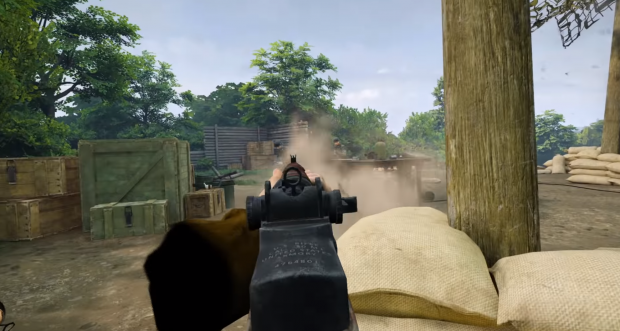