Yacht Club Games, the developers of Shovel Knight have announced a sequel for their extremely popular indie title. The sequel is called 'Shovel Knight Dig' and will take players (unsurprisingly) underground.

Above we have the Shovel Knight Dig trailer which reveals to us that Shovel Knight Dig will be a co-developed title. Not only are Yacht Club Games involved, but so is Nitrome, a fellow indie games developer based in London. Shovel Knight Dig has been in development for about a year now, and players should know that their main foe in this game will be Drill Knight who appears at the start of the trailer.

It has also been confirmed that Jake Kaufman will be returning to the sequel as the games soundtrack composer, this should please fans from the last game as the soundtrack was simply incredible. Yacht Club Games says that there will be new foes for players to battle against, new game mechanics, locations as well as some "familiar faces" to dig into. At the moment there isn't an announced release date yet, but we can assume that the title will be at least released on the Nintendo Switch 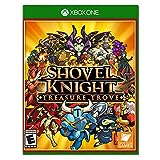