The Oddworld community is patiently waiting for the next release in the series, Oddworld: Soulstorm. A recent announcement has revealed where fans will be able to access their game once its released.

Here is the direct quote "Soulstorm is our most ambitious game ever and we are committed to creating a great game that meets the highest level of quality. But to create the version of Soulstorm we want, and you deserve, we needed additional financial assistance." The console release of the title will be released simultaneously with the PC version sometime during 2020. 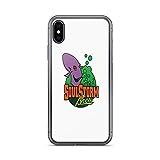