AMD's new Zen 2 processors have opened up a totally new era for PC hardware, with companies tripping over themselves with new PCIe 4.0 capable SSDs. The latest company to jump into the crazy-amounts-of-bandwidth bandwagon is GALAX with its new HOF Pro SSD. This is all thanks to the impressive Phison PS5016-E16 controller. 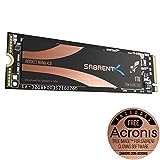