Last week we heard about Ubisoft officially announcing a remastered edition of Assassin's Creed III, it's scheduled to release next month. To everyones surprise we did not see an announcement for a Nintendo Switch version, but according to Ubisoft's website there is one coming. 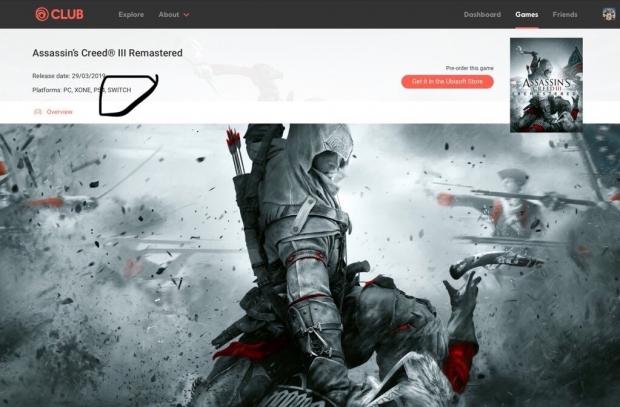 At the end of last month I reported on multiple European websites listing 'Assassin's Creed III Remastered' for the Nintendo Switch. Most of those listings dated that the Switch version of the game would release alongside the Xbox One, PS4 and PC. The scheduled date for that release is March 29th, which coincides with the listing on Ubisofts own website.

The above image which was spotted by Twitter user @CrocOclock, showcases Assassin's Creed III Remastered for the PC, Xbox, PS4 and Switch. CrocOclock discovered this listing when logging into his Ubisoft Club account and visiting the Assassin's Creed III Remastered listing. It is unclear why Ubisoft would hold back from announcing the Switch version yet list it on their own website. Perhaps the company needs more time to bring it over to the Nintendo Switch, or maybe they are waiting for a possible Nintendo Direct that should be happening sometime in the not-so-distant future.