Nintendo's hand-held console has been rumored to be acquiring the classic purple dragon Spyro. Now, a new big retailer has listed the Switch version of the Spyro Reignited Trilogy and also revealed a release date. 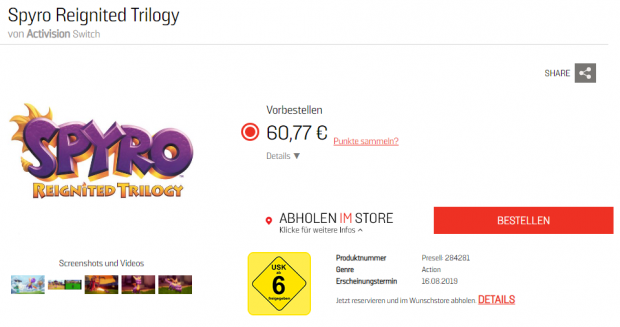 Back in April, we saw a listing for the Spyro Reignited Trilogy on the Nintendo Switch listed by Amazon Mexico. The Amazon leak was soon followed by a leak on from the official Nintendo UK Store who also listed the Trilogy under the title "Spyro The Dragon Remastered". Now, a new listing has surfaced and its from a much larger and what could be seen as a more reliable retailer, GameStop.

GameStop has listed the Spyro Reignited Trilogy on the German website and reveals the supposed release date for game, August 16th. Even though GameSpot may be a large game retailer, the listed date should not be taken as 100% guaranteed. As there has been no word of a Nintendo Switch release for the Reignited Trilogy from either publisher Activision or the titles developer, Toys For Bob. When more information is announced regarding a Switch port, I will be sure to update you.