AMD will be launching its new Navi GPU across multiple price points later this year, with the new 7nm GPU expected to come in four different flavors with varying specs under the Navi 16, Navi 12, Navi 10, and Navi 9 GPUs. 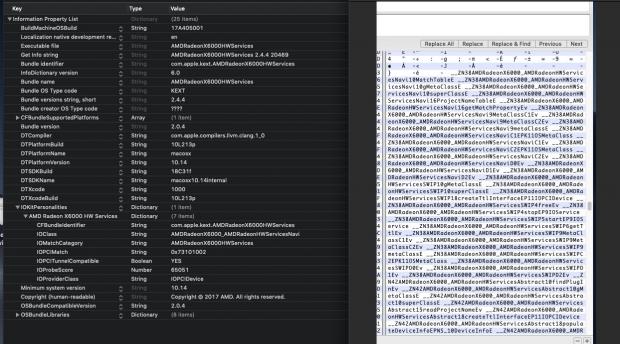 Each of the different GPUs should include varying amounts of Compute Units (CUs), VRAM, memory buses, and more. We should expect more mid-to-high-end performance from Navi with much better power numbers than Vega or Polaris thanks to the shift to 7nm and the changes AMD has made to the Navi architecture with its direct input from Sony for the development of the next-gen PlayStation 5 console.

The new GPUs were discovered in Apple's recent MacOS Mojave update source code, with the file named "AMDRadeon6000HWServiceskext". This isn't fully confirmed just yet, but we're just reporting from what VideoCardz posted by TonyMacx86.

AMD's next graphics card release is the surprise announcement of the Radeon VII, which is really a Radeon Instinct MI50 accelerator with its Vega 20 GPU on 7nm, and huge 16GB of HBM2 with a massive 1TB/sec memory bandwidth, which arrives on February 7. Our sample is en-route, and will be tested to the death against our arsenal of graphics cards including AMD's current flagship RX Vega 64 and NVIDIA GeForce RTX 2080 Ti.