In an effort to bring vibrance and uniqueness to the PlayStation 4 platform, Sony continues doubling down on new IP creation. 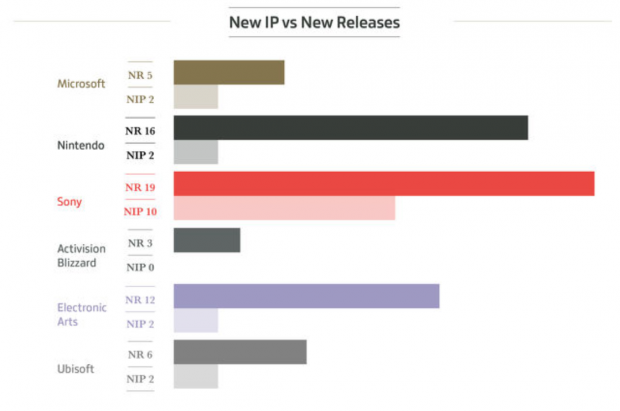 Creating new IPs can be a risky gambit. There's no guarantee a new IP will pay off--many are hit and miss--which is why we see companies throwing out sequels rather than making original projects. But with a huge install base of consoles and a wider focus on smartphones, Sony is all too eager to take that risk with first-party exclusives to drive up software and services revenue. Diversification is key in this business, especially if you're a platform-maker, and Sony wants to make PlayStation a spectrum of new content.

According to new data gleaned by GamesIndustry.biz, almost half of Sony's new releases in 2018 were new IPs. The company released 19 games this year, of which 10 were new IPs. This means Sony released five times more new IPs this year than its competitors Nintendo and Microsoft, who both had two new IPs.

This focus will only continue. The bulk of Sony's yearly revenue is made from its Games and Network Services segment, which includes PlayStation, and the console-driven brand is a huge breadwinner. Continually churning out new content is imperative for the PlayStation 4's long-term success, and it's even more critical to build up the upcoming PlayStation 5.

PlayStation 4 shipments not sit at 82.2 million systems worldwide, and the digital gaming segment remains a huge earner for the company.