According to the latest figures from VG Chartz, Microsoft's Xbox One family of consoles has surpassed 40 million sales globally to date. 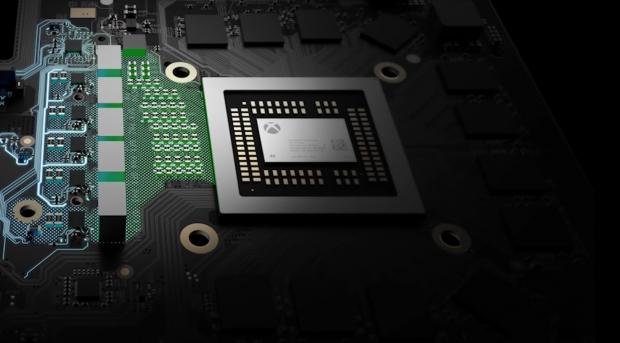 Ever since Microsoft stopped revealing Xbox One console sales figures we've been in the dark about exact numbers. Right now all we have are estimates from sites like VG Chartz and analyst firms, the former of which pinpoints Xbox One, Xbox One S, and Xbox One X combined sales at 40,020,713 units. We're not sure if these numbers are sell-in (shipments to retailers) or sell-through (sales directly to consumers).

Right now Sony leads the charge with a whopping 82.2 million PlayStation 4's shipped to date, and Nintendo has managed to move a very respectable 22.86 million Switch consoles as of September 30, or more than half of the Xbox family's total install base.

But remember hardware sales aren't everything. Microsoft has made tremendous efforts to further its engagement strategy, which sees a fleet of subscriptions, services, online content, and games fold neatly into its cross-platform Xbox-and-PC ecosystem. One of the main reasons Microsoft doesn't divulge sales figures is so it doesn't take focus away from its core tactics: monetizing engagement.

And this plan is working quite well. 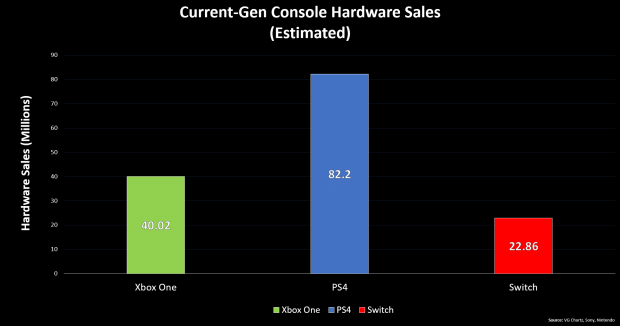 Read more: Why Xbox LIVE is the center of Xbox, not consoles

Fueled by popular subscriptions like Xbox LIVE and Game Pass, Microsoft's gaming division is a consistent quarterly billion-dollar earner. In the three-month period ended September 30, Xbox made $2.73 billion from game sales, subscriptions, and other combined segments, up a mighty 44% year-over-year from Q1'18.

Consoles are important parts of the pie, but they're just that: only parts. They're the hardware gateway to Microsoft's lucrative service-driven digital landscape. The company has built its new Xbox empire around a bigger picture focus rather than just games console sales, and is doing so in a more forward-thinking way than its competitors Sony and Nintendo.

So remember to take everything into consideration before mulling over hardware sales. Consoles are just the beginning of the so-called "Gamer's Journey," which is a cyclic, ever-turning wheel of monetization that's driven by subscriptions, game sales, community events, and online gaming.

As for the future of consoles, sources say Microsoft will expand the Xbox One family with a new digital-only model. The new Xbox, which doesn't have a disc drive, is expected to launch in 2019.

Microsoft is also working on a proper next-generation Xbox that's codenamed Scarlett. This system should be powered by AMD's new Zen 2 CPU technology alongside its next-gen Navi GPU architecture, but there's a possibility it'll be part of the current Xbox One ecosystem and not an actual hardware reset.