Electronic Arts strengthens its foothold as a titan of the industry and rakes in more than $1 billion in its second quarter. 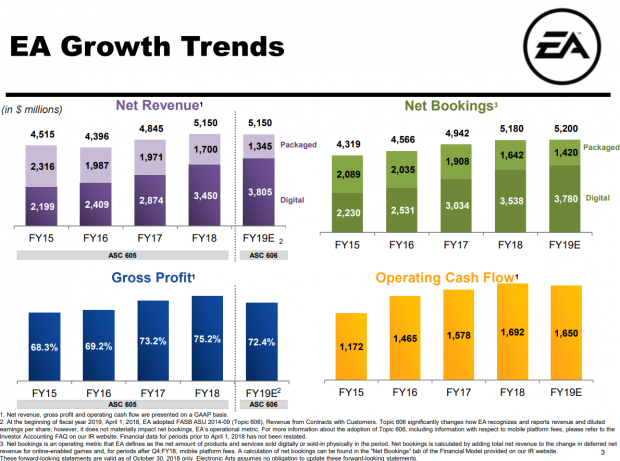 In its recently announced Fiscal Year Q2'19 earnings, EA saw strong growth in key segments. The company generated $1.286 billion in total net revenues in the 3 month period ended September 30, 2018, up a strong 34% year-over-year and $16 million above EA's Q2'19 guidance. Operating income, which is gross profit minus operating expenses, sits at $258 million for the quarter, down 14% year-over-year.

"EA's net revenue was $1.286 billion, above our guidance by $16 million. Operating expenses were $610 million, $64 million lower than our guidance driven by compensation and related expenses and some phasing of marketing expenses," said EA CFO Blake Jorgensen in the earnings call.

"GAAP operating income was $258 million compared to an operating loss of $41 million a year ago and resulting in an earnings per share of $0.83, $0.35 better than our guidance. Underlying profit was much stronger than we had expected driven by increased sales, better gross margin and lower operating expenses."

In trailing 12-months, which includes FY2018's last two quarters combined with FY2019's first two, EA earned $5.165 billion in net revenues. Remember EA spends quite a bit to make its cash, though: in TTM (trailing twelve-months) EA made $3.798 in gross profit after subtracting $1.367 billion in costs. EA also spent over $2.5 billion on operating costs, such as games development, live service hosting, and other administrative fees.

As a result, operating income for the current TTM period sits at $1.290 billion. 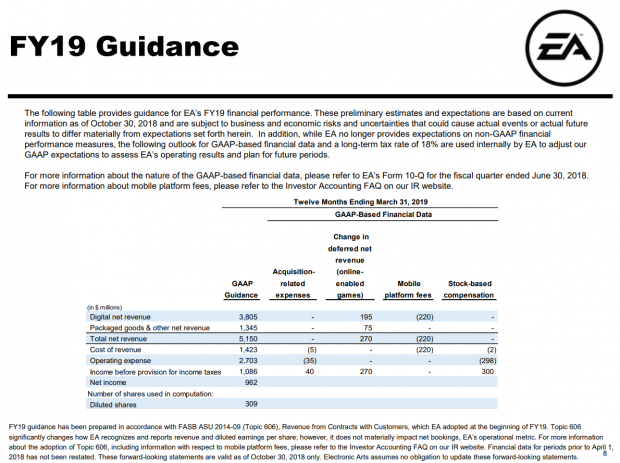