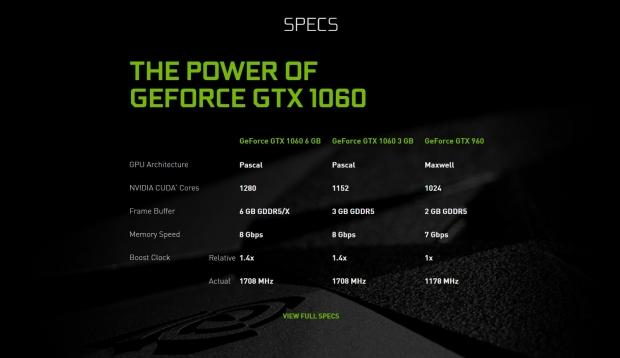 AMD's new Radeon RX 590 might be waiting in the wings but it's not official, and without trying to steal its thunder, NVIDIA has with the quiet release of a new GeForce GTX 1060. The new GeForce GTX 1060 has the same 6GB of VRAM but it has been upgraded to GDDR5X versus the GDDR5 used on all current GTX 1060 graphics cards.

As for the memory bandwidth increase we're looking at:

NVIDIA has the new GeForce GTX 1060 with 6GB of GDDR5X available right now on their own store in Founders Edition form for $299. We should see this better compete against the Radeon RX 580 and its upcoming RX 590 refresh on the newer 12nm node. NVIDIA looks to be getting ahead of the new Radeon release, or this was always in the works. If a new GTX 1060 with GDDR5X was in the works you'd think there'd be an announcement of some kind... but nope, here we are.