TweakTown was one of the first in the world to host an NVIDIA GeForce GTX 1080 giveaway, before it launched back in May 2016, and here we are doing it again. It might not be called the GeForce GTX 1180, but we are giving away TWO of whatever next-gen flagship graphics card NVIDIA releases, whenever they comes out. We're celebrating the fact it has been so long between exciting GPU releases that we're not giving away one, but TWO of their next-gen cards! SLI giveaway, baby! 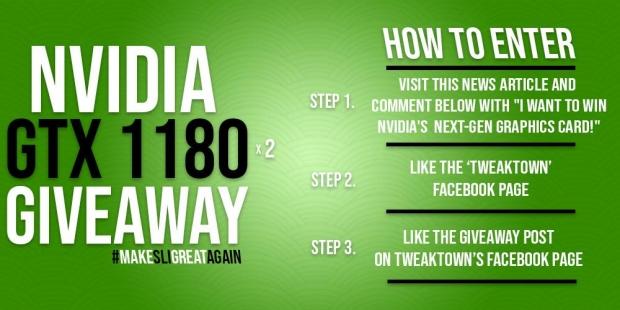 All of the rumors are pointing towards a release sometime this month so we're starting ours now building up to its release, and then hosting livestreams and giveaways on top of this GTX 1180 giveaway once the card has been made official by NVIDIA. We don't know if the flagship new card will be a Turing-based GeForce GTX 1180 or something else such as a GTX 1185/1190/1195 or something, but whatever it is unveiled as TweakTown will give away the best card NVIDIA announces in this world-first competition.

Note: We are giving away two separate cards, with two winners - each receiving a graphics card.

Note: Please make sure to do the above steps as we will disqualify a chosen winner if they haven't met all of these guidelines. It's not much, considering what's up for stake!

TweakTown will be covering shipping wherever you are in the world, so don't worry about that. You should have the card as soon as humanly possible the second the card is launched.