Now that we know a next-gen Xbox is in development, currently known as Project Scarlet, we have no idea about what performance or new features to expect from Microsoft's next-gen Xbox family.

During an interview with Giant Bomb, Xbox boss Phil Spencer said that there is two things that Microsoft wants to focus on with Project Scarlet, the first are frame rates, and the second is loading times. Spencer said: "I think frame rate is an area where consoles can do more. When you look at the balance between CPU and GPU in today's consoles they're a little bit out of whack relative to what's on the PC side".

Spencer isn't a fan of download and loading times on current games, while install times have gone through the roof for some of the new games with massive worlds, 4K resolution and higher resolution textures. There are plenty of the games already on the market, and plenty in development that are driving past 50GB and getting into the 100GB area.

I'm hoping to see the Xbox Scarlet family of consoles arrive in at least two versions, with the cheaper next-gen Xbox pushing 1080p 60FPS minimum with an SSD (super-fast load times). The higher-end Scarlet console could push up to 4K 60FPS minimum if Microsoft really wants to win the next-gen console race against the PS5.

Microsoft is most likely working on its next-gen Xbox Scarlet console with a semi-custom chip from AMD like its current flock of Xbox One consoles. We don't know what to expect inside of the Xbox Scarlet yet, but if Sony is working so closely with AMD on the Navi GPU architecture, what does that mean for the new Xbox?

If the new Xbox Scarlet console uses the Navi GPU architecture, it will have been heavily influenced by Sony... which is Microsoft's direct competitor in the console space. I'm keen to find out what hardware powers the Xbox Scarlet, and I'm sure we'll hear about it soon enough. 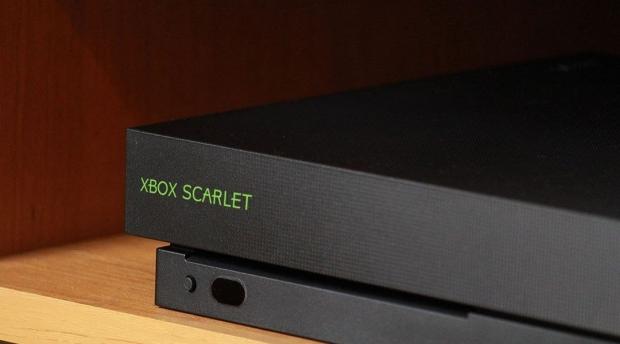