The team completed the massive overclock at the ASUS ROG Taiwan HQ, where they used LN2 and the ASUS ROG Crosshair VII Hero motherboard to drive the Ryzen 7 2700X to a huge 6GHz, on all 8C/16T of Pinnacle Ridge processing power. The team used 1.85V of power, and isn't perfectly stable, but it shows the improvements that AMD made over the first-gen Ryzen CPUs.

AMD's new Ryzen 7 2700X was cooled to an incredible -190C with LN2, as the refreshed Ryzen chip doesn't have an OC bug meaning that it can be driven to super sub-zero temps.

Some interesting things were discovered when the Ryzen 7 2700X was overclocked to 5.7GHz (1.55V) and memory at 1.95V, as it broke 8-core CPU world records, and even beat similiar 8-core Intel Skylake-X processors 400MHz faster at 6.1GHz... impressive stuff, AMD. 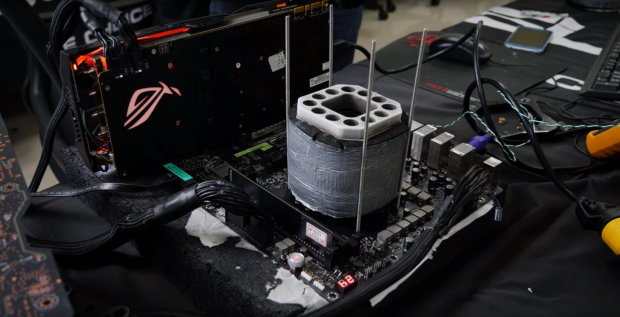