Blizzard have been teasing the release of the next Overwatch hero to be added to the already 26 playable characters, a recent Tweet suggests that it could either be Torbjorn daughter or a cat. 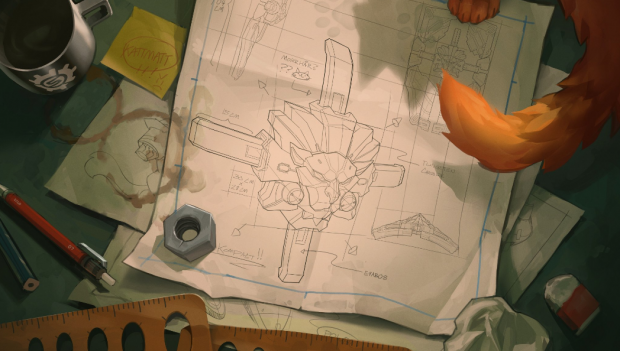 The image that was released on the Overwatch Twitter page shows a sketch of what appears to be lion design, very much similar to that of Reinhardts shield. The theory that the next hero could be Torbjorn's daughter named Brigitte is linked to some earlier teasers which also include Reinhardt, the hints are a letter written from Torbjorn to Reinhardt referencing Brigitte's name and also a weapon titled "Slaga."

The image that was released today also shows what appears to be ginger cat prowling around on the top of weapon designs. We know that Torbjorn does have a cat and it also has been said by game director, Jeff Kaplan that a 'Jetpack Cat' has been considered before "It was this jetpack and it had this cat that laid in it, like a cat does. Then every once in a while it would paw at the controls. It was a cat in a jetpack."

What we can know for certain though is that Blizzard will be announcing the new hero very soon as the Twitter post does say "last minute check" which could suggest the last post before the announcement.