There has been a stream of fake news regarding AMD's next-gen Ryzen and new Ryzen 10 processors, but something that has been confirmed is that AMD is planning to launch their second-gen Ryzen CPUs in Q1 2018. 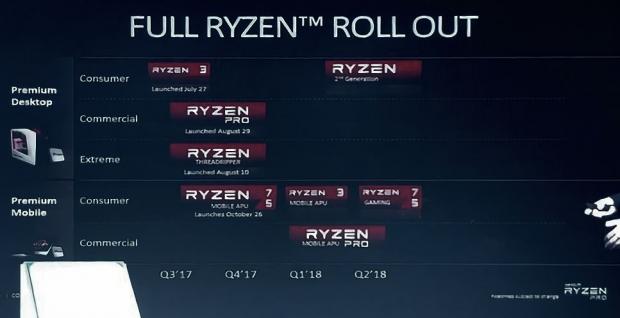 According to the latest roadmap from AMD we should expect Raven Ridge (Ryzen 3 mobile APU) in Q1 2018, a new chip that will be unveiled at an event before CES 2018 in the first week of January. AMD will also release their business-oriented Ryzen PRO mobile APUs in early 2018, while we'll see the second-gen Ryzen CPUs released somewhere in the March timeframe.

AMD can't name their new Ryzen processors 'Ryzen 2' as it would be beyond confusing with the current nomenclature of Ryzen 3/5/7, so we should expect the Ryzen 2000 series. This would allow AMD to push the Ryzen 7 2800X for example, something that would succeed the Ryzen 7 1800X that is currently the flagship Ryzen 7 processor.

We won't have long to wait, that's for sure... can you believe we're already on the doorstep of the second-generation Ryzen processors? Awesome times ahead.