NVIDIA announced its monstrous new TITAN V a few days ago, an AI/deep learning focused graphics card that costs a whopping $2999. In the usual fashion, benchmarks have now been teased against the GeForce GTX 1080 Ti. A perfect comparison considering the GTX 1080 Ti is $699, and the TITAN V is $2999. 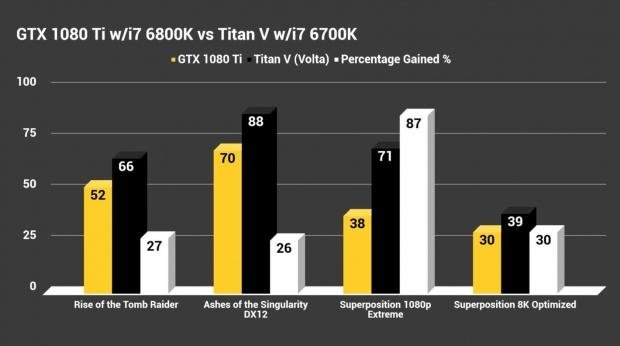 The benchmarks aren't official, and were posted by Reddit user 'MrOmgWtfHaxor' who said they are the results of "someone posting benchmark results in the NVIDIA Discord". The comparison was between a GTX 1080 Ti heavily overclocked under LN2 at a we-won't-see-this-in-the-mortal-realm GPU frequency of 2.5GHz while the new TITAN V was clocked modestly at 1.8GHz.

But what about games? Under the highest settings in 1080p, the TITAN V manages around 66FPS average in Rise of the Tomb Raider, 158FPS average in Gears of War 4, and 88FPS in Ashes of the Singularity. This means that the TITAN V is around 25-30% faster than the GTX 1080 Ti in gaming - all run on an Intel Core i7-6700K processor.