PCI-SIG, the organization behind the PCIe standard has released the finalized specs on PCIe 4.0, with some highlights that impress. We have up to 16GT/s of bandwidth with PCIe 4.0, up from the 8GT/s of bandwidth offered on PCIe 3.0 - but it's PCIe 5.0 that has my mouth watering with a huge 32GT/s of bandwidth, and will arrive in 2019. 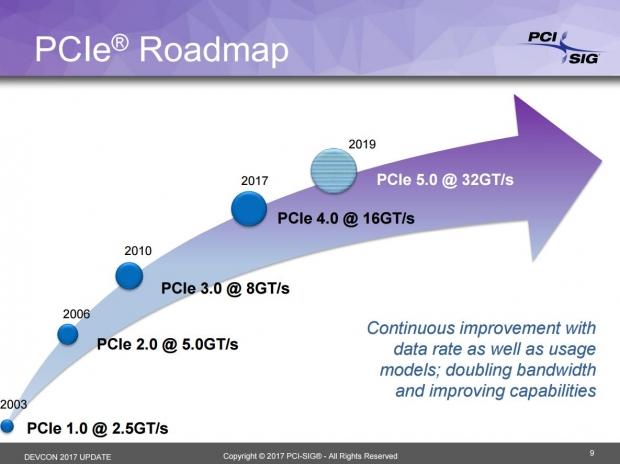 As for the PCIe 4.0 highlights, this is what Chairman and President of PCI-SIG, Al Yanes, had to say:

What will PCIe 4.0 provide us, other than just ridiculous amounts of bandwidth? As Tom's Hardware points out, PCIe 4.0 will provide the bandwidth to make cheaper NVMe SSDs possible, as they'll need just half the PCIe lanes, while 10GbE connections over a single PCIe lane would be made possible. That kind of speed is impossible right now with limited PCIe lanes.

Once we get to the point of having PCIe 4.0 and PCIe 5.0 on our motherboards, we can start talking about single graphics cards running 4K 120 and 8K 60, as well as super high-end VR/AR/MR technology that will require some truly next-gen GPUs to run at 120FPS or more.