Industry veteran Rich Vogel has had a hand in some of the most influential games-as-a-service (GaaS) games in the industry, including Ultima Online, Meridian 59, and Star Wars: The Old Republic. Now Mr. Vogel has joined Certain Affinity as Vice President of Technology and Services to lend his expertise on two new service-based games: a new IP and an original game. What if the latter was a cross-platform free-to-play Halo game with microtransactions? 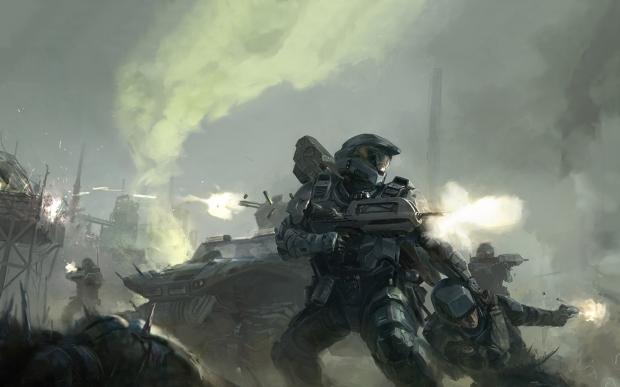 Yes, this is me thinking out loud, and no, I don't have concrete evidence to back this theory up other than my personal analysis of the games industry and a few bits of perspective that may lend some credence to the theory. When I say a "free to play Halo game," I mean on PC and consoles with microtransactions/lootboxes, a plug for streaming, and a set up for eSports action. There's a few reasons why I think this could happen. For starters, Certain Affinity has worked on six Halo projects, three of which were major roles: they co-developed Halo 4 and Halo 5 with 343 Industries, and made Halo: The Master Chief Collection's multiplayer--so it's fair to say they're well-versed in the Halo world. Secondly, Mr. Vogel is keen on aligning Certain Affinity to the billion-dollar market of GaaS, and instantly recognizable properties like Halo would ensure a playerbase. Thirdly, Microsoft is shifting towards a cross-unification platform by making Xbox a service rather than a console; this service bridges Windows 10 PCs and Xbox One consoles, and the company has focused intensively and the popular games-as-a-service format, which has found its way into nearly every major first-party game to date, from Halo 5: Guardians to Gears of War 4 and the most recent Forza 7.

This wouldn't be the first time (nor the last) Microsoft has tried something like this. Remember Halo Online?

Back in March 2015 Halo dev 343 Industries announced Halo Online, an experimental free-to-play shooter that, for some reason, was only available in Russia.

The game servers shut down in December of the same year, and was confirmed dead in August 2016. This could've been a fleeting test, or it could've been a gateway to something bigger, something that aligns with Microsoft's transformative values and a project that could fill the Halo-shaped void while 343i works on Halo 6 (although Halo 5 is still a money-making juggernaut).

But we can't forget about Halo 5's free multiplayer on PC, of course. One could argue that the game I'm describing already exists.

In September of 2016, a month after Halo Online was confirmed dead, 343i launched the Halo 5 Forge mode for free on PC. This allowed gamers to create levels with the Forge map editor as well as play custom online multiplayer matches on these levels with up to 16 players. This marked the first time Halo had been on PC since 2007's launch of Halo 2 on Windows Vista.

The big difference here is that Halo 5 Forge on PC is just a slice of the full multiplayer experience available in retail Halo 5. There's no ranked matches, no playlists, no stat tracking, etc. And the biggest missing piece: the game isn't monetized. Halo 5's REQ microtransactions loom over multiplayer like a colossal shadow.

But what if the Forge mode was a test of sorts for this new project?

According to Mr. Vogel, one of the principal issues with service-based games is visibility. Slapping "Halo" on any product sure would alleviate that problem wouldn't it?

"One of the biggest problems we have is visibility," Vogel said in an interview with GamesIndustry.biz.

"How do you get something new to people out there when there's so much stuff out there? I think it's about finding something that resonates well with people and understanding how to market to those people so you can develop a viral niche, then you have the hockey stick [growth curve], right? I think there's enough room in there, if you're not copying what other people are doing, mind you. Because I don't think copycats will do it."

All of this is 100% conjecture on my part and I have no information, sources, or bona-fide proof that Certain Affinity is making a free-to-play Halo game for PC and consoles.

I've been one of the proponents of the Halo series for so long, rigorously defending how the franchise should stay exclusive to the Xbox console platform simply because it's such a big system-seller...but today's industry landscape is dramatically different.

Now the billion-dollar industry is dominated not by single-player games but by continually-changing and shifting online experiences that engage millions of users every month--and, more importantly, monetize these users.

And now Xbox isn't a console. It's a service that binds Windows 10 PCs and Xbox One consoles together.

The gaming world is shifting, and Microsoft has laid many steps to shift with it. A service-based Halo game with microtransactions would fit the bill nicely, but we arguably already have that very game with Halo 5: Guardians--and Windows 10's free Forge mode.

Since the game I'm describing might already exist, what if Certain Affinity is making a Halo MMO? Just some food for thought.

Or it could be something totally unrelated to Halo.