Final Fantasy XV is coming to PC in 2018, and Square Enix isn't holding anything back: the developer has ensured the game will hit insane high-end performance with 8K resolution support and optimizations on NVIDIA's GeForce GTX 10 series video cards. 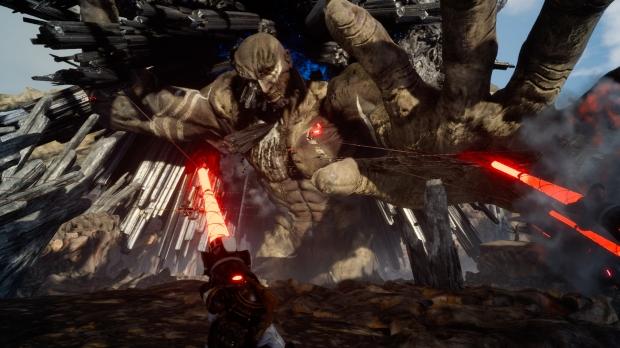 When I played Final Fantasy XV on my PS4 in 2016, I knew right away that the game had been watered down to run on outdated console hardware. Sure the game looked fine, and played fine, but it revved my PS4 to its limit, and I longed to jump in the dynamic open world of Eos without limitations. With the Final Fantasy XV Windows Edition, enthusiast PC gamers will be able to experience the unfettered explosive power of Square Enix's behemoth Luminous Engine. The PC version, which has been built specifically to leverage today's most demanding hardware and graphics technologies, will support native 4K and even 8K resolution--provided you have the graphics horsepower to hit that perf.

Make no mistake: FFXV on PC is fine-tuned and tailor-made for enthusiast rigs. The game has mind-boggling recommend specs of a NVIDIA GeForce GTX 1080 Ti graphics card as well as 16GB of RAM, and clocks in at a huge 170GB install size. "FFXV Windows Edition will support high-resolution options and is compatible with native 4K (3840 x 2160) resolution and HDR 10. Graphical options can also be configured to support up to 8K. Thanks to NVIDIA, you can experience the beautiful and carefully-crafted world of Eos like never before," Square Enix wrote on the game's Steam page.

"With the help of NVIDIA, we are creating a stunning visual experience in FINAL FANTASY XV WINDOWS EDITION, one worthy of this beloved franchise," said Hajime Tabata, Director of FINAL FANTASY XV. "NVIDIA pushes the pace of innovation in our industry, and that benefits gamers and developers alike."

We can't wait to see the world of Eos in a whole new dimension of graphical clarity and performance. Final Fantasy XV's PC version is slated to release Early 2018, and will likely launch before Square Enix's fiscal year timeline ends on March 31, 2018.