More details about RED Digital's upcoming Hydrogen phone are starting to flow out. In a recent video, RED user and YouTube tech celebrity MKBHD (Marques Brownlee) showed off a prototype of the RED Hydrogen. 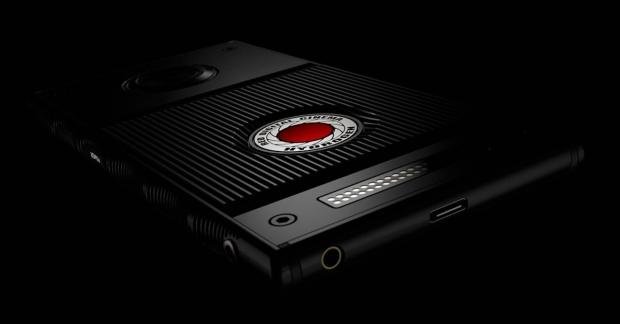 This non-working prototype shows the overall design of the phone without any actual working parts. It shows the three different zones of the back of the device which included the area around the dual camera, the center area with the RED logo and the bottom with the data and power pins for connecting modules.

The RED Hydrogen's pin system is designed to create a Moto Mods-like experience on steroids. The patents around the RED Hydrogen indicate that up to 4 different modules could be stacked together including a possible battery module. This is important because RED isn't really known for the battery life of their products and with the first holographic display in the world, we suspect the battery life likely won't be fantastic on this 5.7" display. The glasses-free 3D capability sounds promising, and it looks like MKBHD has already seen it for himself, but we probably won't know what it looks like for quite some time.

The video also shows that the RED Hydrogen will have grooves on its sides to help make it more greppable as it is currently already bigger than an iPhone 7 Plus and with added modules will likely be hard to grip. It will have bottom-firing speakers and a top-mounted USB Type-C port, even though it is currently at the bottom. We don't know what processor or battery it will have nor the specs of the cameras or the storage or RAM, however, RED plans to release more details about the RED Hydrogen in the next 30 to 45 days.