NVIDIA has recently released a more refined PC spec requirements list for Mass Effect: Andromeda, revealing that minimum spec PCs with a GeForce GTX 660 may be stuck at 720p, and EA predicts rigs with NVIDIA's GeForce GTX 1060 will only hit 1080p 30FPS at High preset settings. 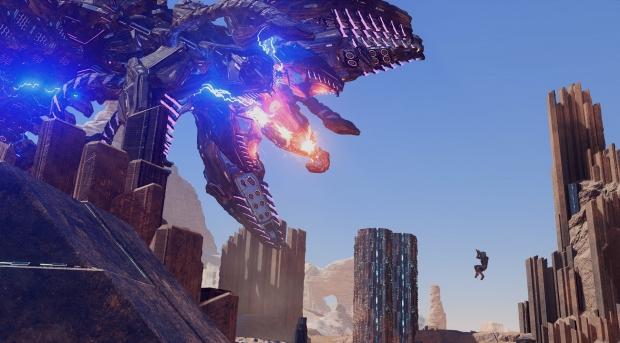 Mass Effect: Andromeda looks to be quite the demanding PC game, and it looks like BioWare and EA have teamed up with NVIDIA to get the most out of NVIDIA's GeForce GTX 10 series GPUs. For example, the minimum GTX 660 GPU spec will only play the game in 1280 x 720p at Low settings, and a GTX 1060 may not even be enough to hit 1080p 60FPS in Ultra presets.

NVIDIA recently published Mass Effect: Andromeda's PC spec requirements and graphics options, which you can find below. These specs only mentioned the graphical presets and the resolution, not the estimated FPS. However, EA published an interesting graph outlining the estimated FPS for the minimum and recommended system requirements.

"To run at higher resolutions with higher framerates" in Mass Effect: Andromeda, NVIDIA recommends you use a GTX 1070, GTX 1080, or GTX 1080 Ti. Since the minimum and recommended specs both are estimated to hit 720p 30FPS and 1080p 30FPS respectively, it appears NVIDIA wants you to have a GeForce GTX 1070 or above to hit 1080p 60FPS at ultra settings in ME: Andromeda.

You can compare the specs below with the estimated FPS performance graph included below as well. 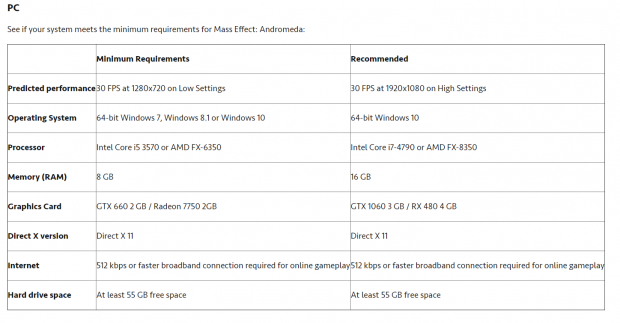 For playing Mass Effect: Andromeda on PC, here's what BioWare and Electronic Arts recommend for Minimum settings at 1280x720, and High settings at 1920x1080:

If you wish to crank those 16 options to their maximum levels, or run at higher resolutions with higher framerates, you'll want to equip your system with a faster GPU, such as the GeForce GTX 1070, GeForce GTX 1080, or newly-announced GeForce GTX 1080 Ti.

BioWare has confirmed that Mass Effect: Andromeda will have an uncapped frame rate on PC as well as 21:9 UltraWide support on day one, but it looks like you'll need a pretty beefy video card to hit amazing performance, especially in 1440p and 4K.

NVIDIA just released its latest powerhouse GeForce GTX 1080 Ti for $699, which delivers Titan X-level perf at a portion of the cost. We have to wonder if Mass Effect: Andromeda will require a GTX 1080 Ti to run smooth in 4K, and the game itself seems tuned and optimized for NVIDIA's GTX 10 series GPUs. Be sure to keep a look out for our benchmarks and analysis.

Also remember that Mass Effect: Andromeda is exclusive to Origin, and that it will have multiplayer microtransactions to fund free additional maps.