Nioh's boss fights get progressively more difficult and then you come across Nue, a brutal chimera that summons devastating lightning from the heavens and creates tons of Yokai Realm pools to wreck your day (and your ki). But he's far from invincible, and he can actually be beaten quite efficiently with a simple method. We'll teach you that method here today.

Defeating bosses often requires abstract thought and the ability to use your surroundings to your advantage. In pure Ninja Gaiden style, Nue's boss fight really forces you to use your environment to take out your quarry. This particular battle really opened my eyes on how to approach enemies in Nioh, and taught me a newfound respect for the game: it's not just about perfect timing, strikes, caution and general mastery of fluid combat, but a total big picture focus--using strategy when you can, where you can.

Nue killed me about 8 times before I tried this method, and I was able to kill the mythical beast in my second try. The method is rather simple and revolves around one concept: creating a protective cage for yourself in the level's porches and striking slow, steady, and consistently. 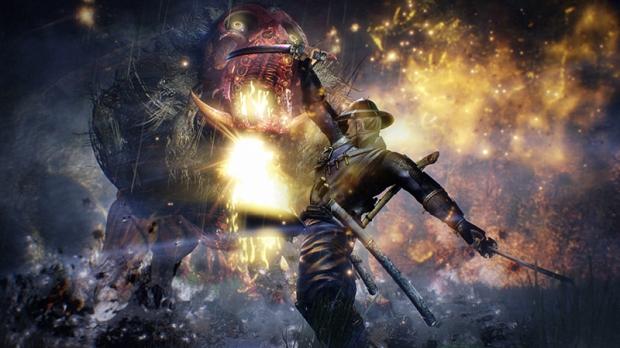 Method: Stay inside the porch

Like any boss, Nue's moves are telegraphed with distinct visual cues. We break down those cues and his actual moveset below:https://gyazo.com/b1cf4b70796086e388b34e49bea85855

These bolts are why Nue is so difficult. Not only does every lightning bolt deal decent damage, but they summon Yokai Realm pools which sap your ki regeneration. The lightning bolts will track you wherever you go, but they're slow and clumsy, so if you're running/dashing you'll be fine. However if you use the method we describe you won't need to dash or run from the bolts.

Without this method described here you'd have to be quite skilled at ki pulsing, and you'd need to use the tricky advanced ki pulse method of changing stances mid-pulse to really get enough ki for striking, blocking, and dash/dodging.

He can summon four bolts or a single bolt depending on how long he stays still and roars; the longer he roars, the more bolts he'll summon. Be careful as he can summon a bolt somewhat quickly as a counter move.

Nue can summon a beam of lightning from his mouth that can be pretty nasty, especially when you're at lower health and he does this move two or three times in a row.

Lightning breath comes out as a straight beam and Nue turn his head from right to left in a limited arc to zap you.

Nue always moves his head from right to left so NEVER roll right towards the beam. You want to roll back and left away from the beam's reach.

Nue's tail ends in a snake that shoots poison. If he can't get to you with his physical attacks or lightning, he'll shoot out poison to interrupt your attacks and chip away at your health.

This attack is easily avoidable due to its short range. This poison doesn't last, however, so don't worry about antidotes.

This attack is multifaceted and has multiple parts. Nue will sometimes strike in one-two slashes and then launch into a forward roll as a rather death-dealing combo.

What's even worse is that three lightning bolts fall down as Nue rolls, so if you dodge the roll, you could sidestep right into a nasty charged bolt. Oh, and every bolt summons a Yokai Realm pool too, making the surprise all the more nasty.

Nue can do the 1-2 slash combo independently of the roll maneuver and vice versa, so look out for the visual cues.

He might not do the roll after ever quick one-two strike, and will often close the distance with the roll if you're too far away.

Visual Cue - Nue will turn his head and body towards the left (your left, Nue's right) and then dive in the opposite direction, swinging his body and tail at you