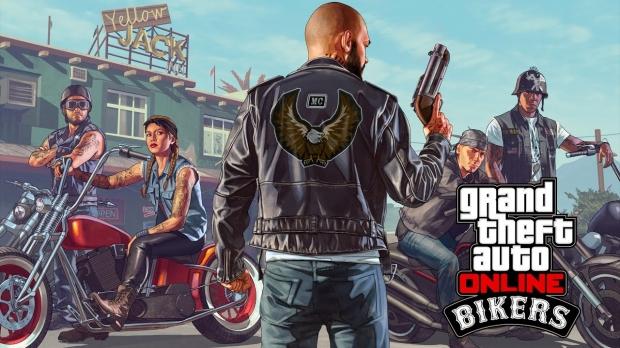 The earnings call made one thing clear: like EA, Take-Two has a potent formula regarding engagement and recurring consumer spending. This money-making strategy has manifested strongest with GTA Online, which continues to pull in quite a bit of earnings for Take-Two and Rockstar.

Sales and earnings were up in the three-month quarter, and recurrent consumer spending grew to a record high of 55%, signalling that tons of GTA Online, NBA 2K and mobile players continue to spend their money on in-game microtransactions, DLC content, and other in-game based purchases.

In the nine-month period across Q1-Q3 FY2017, Take-Two earned $1.4 billion, and below we've transcribed the most important tidbits of the earnings call for your perusal: 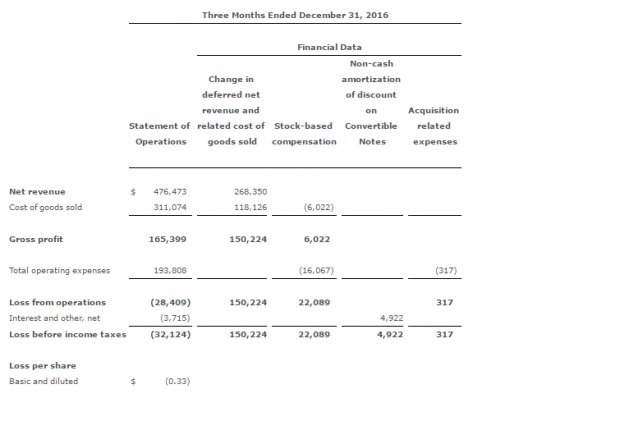 "During the third quarter we delivered record digitally-delivered bookings delivered by growth in both full game downloads and recurrent consumer spending. We continue to benefit as consumers buy a growing number of games as digital downloads and for the current fiscal year we're seeing more than 25% of our current-generation console titles purchased digitally."

"More importantly recurrent consumer spending grew 55% to its highest level ever and accounted for 50% of digitally-delivered bookings, and over 23% of total bookings in the third quarter."

"$1.4 billion in cash earned in the nine-month period ending December 31."

"GTA V and GTA Online continue to outperform our expectations, as they have in every quarter since their release. GTA V remains the highest rated game of the current console generation with sell-in amounts surpassing 75 million units."

"According to NPD which combines digital and physical sales, GTA V was the sixth highest selling game in all games on all platforms in 2016."

"In addition, GTA Online continues to deliver growth in engagement and bookings, with a record number of new players in December driven by the ongoing release of new content. During the third quarter Rockstar games supported Grand Theft Auto Online with four significant updates, and has many more planned going forward.

"The sustained performance of GTA V and GTA Online is a remarkable achievement."

"In addition to virtual currency in GTA Online and NBA 2K, recurrent spending was enhanced by a variety of other offerings. In the free-to-play category WWE Supercard delivered its best quarter ever, with bookings nearly doubling and total downloads now exceeding 13 million."

"75% of our sales are physical, and retail remains a very important part of our business."

"Q3 2017 was the best-ever quarter for recurrent spending."

"Mafia III achieved the highest first-week sell-in of 2K's history and was a popular choice for consumers in the holiday season."

"2K and Hangar 13 continue to support Mafia 3 with numerous free content updates including character clothing, vehicle customization, racing challenges and more. The team is currently working on three exciting downloadable story expansions which will be released this year which can be purchased individually or as part of the mafia 3 season pass.

"NBA 2K17 sold-in nearly seven million units, up 10% over NBA 2K16, and is poised to become our highest-selling sports title ever."

"Take-Two Had a strong holiday quarter. All of our offerings initially exceeding our expectations, with total bookings growing 51% to $719 million dollars. Of this amount, 47% was digitally-delivered bookings, which grew 66% to $336.3 million dollars, a new record."

"The upside to total bookings was driven primarily by the better than expected performance of GTA V as well as recurrent consumer spending on GTA Online and NBA 2K17."

"Our better than expected bookings convert to strong net cash provided by operating activities, which grew 72% to $291 million dollars. We've deployed 6.1 million dollars on capital expenditures and as of December 31 our cash in terms of investment balance was $1.44 billion dollars."

"Net revenue grew by 15% to $476.5 million dollars. Growth was driven primarily by the launch of Sid Meier's Civilization VI and the recognition of previously deferred revenue from Grand Theft Auto Online and NBA 2K." 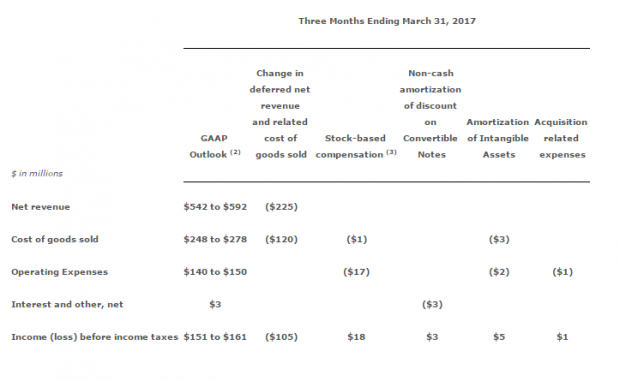 "Net revenue is expected to be increased by a $225 million dollar change in deferred net revenue primarily due to recognition of previously deferred revenues from Mafia III." 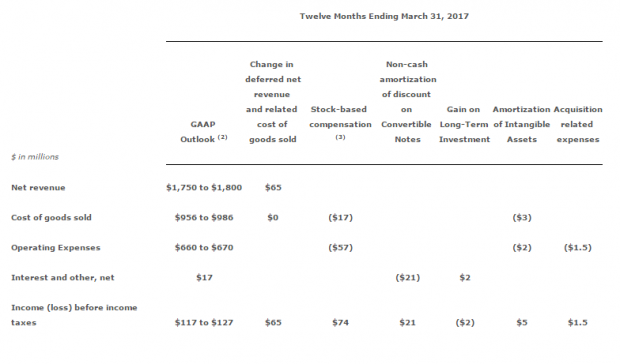 "As a result of our better-than-expected third quarter bookings we have a strong outlook for the remainder of the year. We are raising our mid-point bookings outlook by $100 million dollars. We now expected total bookings to by 16% at the mid-point of our outlook and to range from $1.72 to $1.77 billion dollars. "

"In addition we now expect digital bookings to grow around by 20% driven by growth in both recurrent consumer spending and full-game downloads. We now expect Grand Theft Auto Online to be up for the full fiscal year."

"We expect our bookings breakdown from our labels to be roughly 65% 2K and 35% Rockstar Games."

"Total operating expenses (for the year) are expected to range from $660 to $670 million dollars. At the mid-point, this represents a 9% increase over the prior year, driven primarily buy market expenses for Fiscal 2017 and 2018 release slates as well as higher R&D expenses."

"Consumer demand for our new releases and catalog titles was strong throughout the period, and players continued to engage significantly with our games after purchase. As a result, we delivered better-than-expected bookings, including our best-ever quarter for recurrent consumer spending, along with double-digit growth in both net revenue and net cash provided by operating activities.

"Last week, we deployed a portion of our Company's cash on hand to acquire Social Point, a highly-successful free-to-play mobile game developer that has a proven track record of growing revenues and delivering multiple hits. We are incredibly excited about this acquisition, which reflects our strategy to deploy our capital resources prudently and to take measured risks that provide immediately accretive opportunities for our business and the potential for long-term growth.

"Looking ahead, our Company has a robust long-term development pipeline and is better positioned for success than at any time in its history.

"We expect to grow both bookings and net cash provided by operating activities in fiscal 2018, driven by our release slate led by Rockstar Games' highly anticipated launch of Red Dead Redemption 2."