We've just reported on the AMD Radeon RX 480 consuming just 100W of power, and running at 60C under gaming load, with the Polaris 10-based card keeping up with, and beating the HBM1-based Radeon R9 Nano. Not too bad for $199, right? Well, now we have more details on not just the Polaris 10 GPU, but the Polaris 11 GPU which will be powering the lower-end cards. 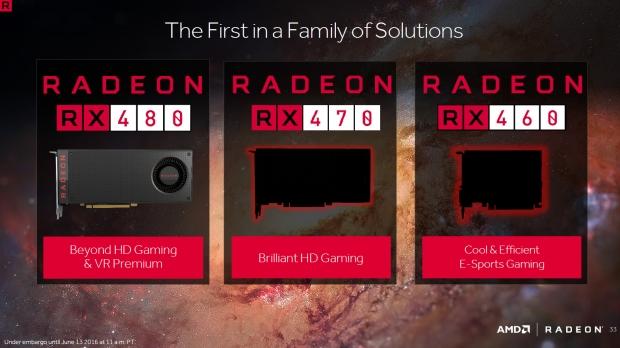 The Polaris 11 GPU will power the lower-end, eSports-aimed RX 460 card, which will feature 1024 stream processors, with no GPU clock speed numbers confirmed just yet. We know that there will be 2GB and 4GB models of the RX 460 offered, with a 128-bit memory bus and memory bandwidth of somewhere around 112GB/sec. The RX 460 features a pretty damn good 2.8x performance per watt improvement over the previous GCN cards like the Radeon R7 360. The Radeon RX 460 will also have a TDP of only 75W, so you don't need to use a PCIe power connector - which is going to be awesome for gamers who don't have a huge budget in terms of money, and power consumption/bills.