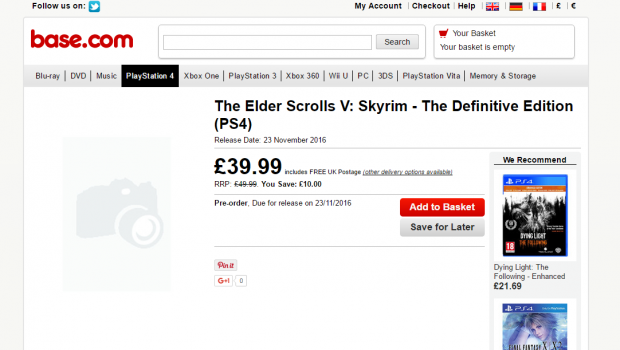 Not so long ago we reported that Bethesda will unveil Skyrim remastered for PS4 and Xbox One will full mod support. Now UK retailer Base.com has listed the "Skyrim Definitive Edition" for a release on November 23, 2016, adding more credence of an E3 reveal.

Bethesda is also expected to reveal even more goodies at their E3 2016 showcase--as if Skyrim remastered wasn't enough--including a Wolfenstein 2 sequel from Machine Games, Prey 2, and The Evil Within 2 from Tango Gameworks. We'll likely also see even more Fallout 4 DLC (yes, there's more!) and possibly DOOM.

Bethesda's E3 2016 lineup kicks off on Sunday, June 12 at 7PM PST / 10PM EST. We'll be sure to keep you updated with all the announcements right here at TweakTown.