E3 2016 is fast approaching--just next week!--and we've spotted the perfect timetable schedule to ensure you don't miss a single announcement regardless of where you are across the globe. 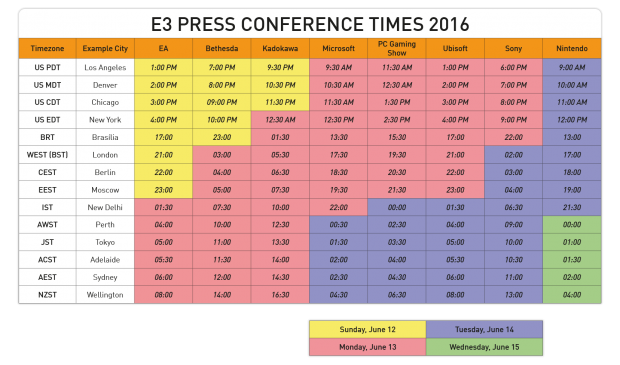 It's that time of year again--the time of leaks, bullshots, and insane new consoles, and we're here to make sure you get the full E3 2016 schedule. Admittedly I was going to compile a list of all the press conferences, but then I came across this amazing timetable from Twitter's @Cheesemeister3k that puts most of the handmade schedules to shame.

As you can see, the schedule is complete with major timezone conversions of all the major press conference events, from Bethesda to Sony and the PC Gaming Show. We expect to see Sony unveil its new PlayStation 4K console at the show, and Microsoft will show off its new Xbox hardware including the Xbox One Mini and the new Xbox streaming set-top box. Nintendo is expected to have a new 90 minute gameplay demo of the new Legend of Zelda game, with new details and an official name for the game.

We'll be sure to update you with live feeds of each press conference once their respective date nears, but for now, check out our recent pre-E3 2016 coverage. Big thanks to Cheesemeister3K for making such a helpful tool for the community!