AMD is ramping up for quite a large Computex 2016, with the big reveal of the next-gen Polaris-based video cards, and then the exciting new Zen architecture on the CPU side of things. Well, it looks like the new Zen APUs will be exciting, with a purported 50% increase in performance than the previous Kaveri-based APUs. 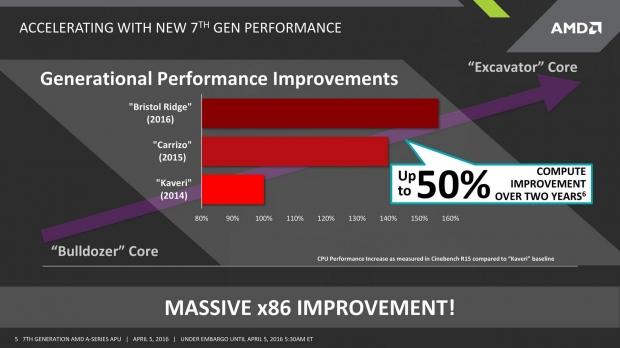 AMD's new processors will arrive on the AM4 socket, with the flagship SKU offering 12 compute cores, with 4 of them Compute-based, while the rest will reside on the GPU side. The flagship APU will have 4 x CPU cores at 3.7GHz, with Turbo boosting it to 4.2GHz, with 2MB of L2 cache. On the GPU side, we'll have 8 x GCN 3.0-based compute units, with 512 streaming processors and a TDP of 65W. According to the latest leaks, AMD will have a low-power version that consumes 35W with a default clock of 2.9GHz and Turbo boost of up to 3.8GHz.

The performance tier SKU will be kicked down to 10 compute cores, with 4 dedicated to the compute side, and 6 to the graphics side. These chips will arrive in two different variants, with the highest APU hitting 3.5GHz and 3.8GHz on boost, while the 35W version will have a clock speed of 2.8GHz and boost of 3.5GHz. The budget ones will have 6 compute cores, at up to 3.5GHz and 3.8GHz on turbo, with 1MB of L2 cache. The graphics side has 4 compute units, and 256 GCN 3.0-based stream processors.

What about the performance? the new reports have gaming performance being 20% higher than the Carrizo Mobility chip, and over 50% over the Kaveri-based chips. It looks like Bristol Ridge is going to be mighty powerful, but where will it sit against an Intel CPU?