A new second-generation Xbox One model has been in mass production since February 2016, according to recently unearthed documents. 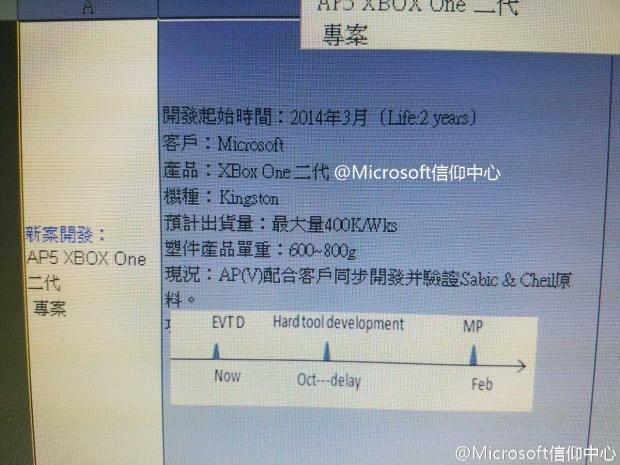 Microsoft is planning its own mid-cycle second-generation Xbox One refresh to counter Sony's new 4K-ready PlayStation Neo, leaked documents suggest. The Japanese documents were spotted on NeoGAF, and have since been translated to read:

Reports of Microsoft's new Xbox One refresh have piled up recently: new Xbox One components were revealed in pre-released FCC filings, and VentureBeat was told by internal sources that Microsoft is testing various new Xbox prototypes with high-end hardware. AMD let slip that new PS4 and Xbox One consoles were on the horizon, with the PS4 Neo possibly leveraging AMD's next-gen Polaris 10 Ellesmere GPU technology.

The major consensus is that the new mid-cycle Xbox One refresh will be outfitted with more powerful and energy-efficient hardware, thus allowing for a dramatic size reduction. If the new Xbox One leverages AMD's 14nm FinFET Polaris GPUs, the console will be able to push native 1080p 60FPS while significantly lowering power draw and thermal output.

Xbox's Major Nelson indirectly responded to the leaks on Twitter, saying: "Dear Internet: Don't bother wasting time and making connections where there are none.

Microsoft is expected to announce the new Xbox One refresh at E3 2016 in June.