If you've read our Quantum Break review, you know that Remedy's latest time drama is quite a mess on PC. Now the developers have officially acknowledged the PC port's many problems, and promise that a fix is on its way. 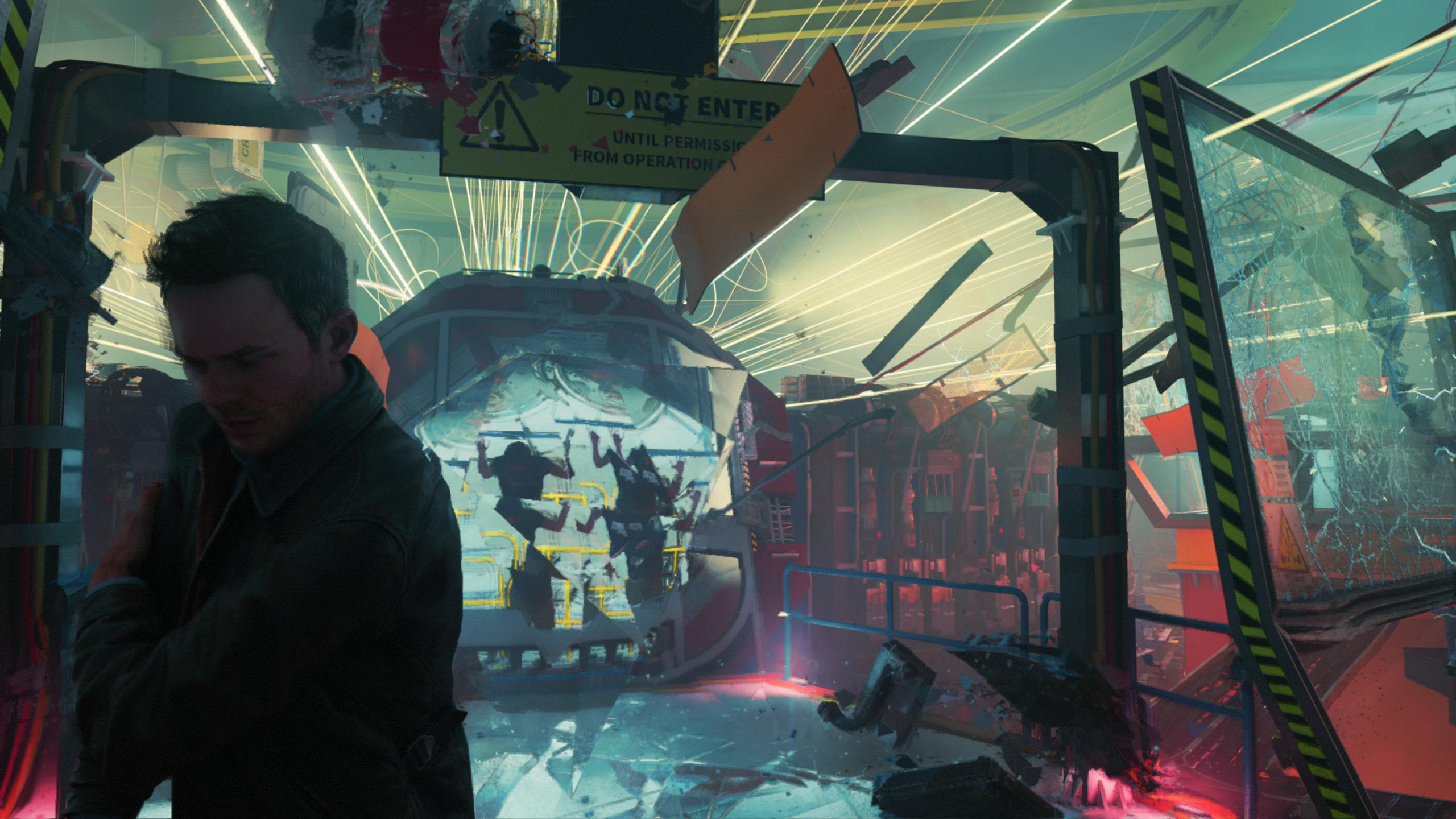 Remedy has heard PC gamers loud and clear. The devs know Quantum Break is having a rough time on PC, with issues like frame-rate drops, screen tearing, and lack of GPU support just to name a few. Now the studio has delivered an official Quantum Break PC status update that gives a step-by-step explanation on which issues can be fixed, and by when.

The devs promise that a good portion of the game's technical issues will be fixed with an upcoming title update, and assure players that they're working alongside the graphics gurus at AMD and NVIDIA to help improve performance. Sadly, PC gamers will never be able to play Quantum Break in SLI or Crossfire configurations. "Quantum Break on Windows 10 unfortunately doesn't support DirectX12 multi-GPU rendering. Due to the engine architecture, the work needed to support multiple GPUs would have been significant and out of scope for Remedy for Quantum Break."

The update will address problems like frame stutters and cinematic screen tearing, crashing to desktop errors, and even adds an option to quit on the main menu. Remedy will also give PC gamers more control over visual effects by letting users toggle film grain and adjust blur settings.

As for the limitations caused by Windows 10's UWP platform, Remedy doesn't have a lot of leeway, saying that Quantum Break will get G-Sync, Free-Sync, and the option to disable V-Sync in May. 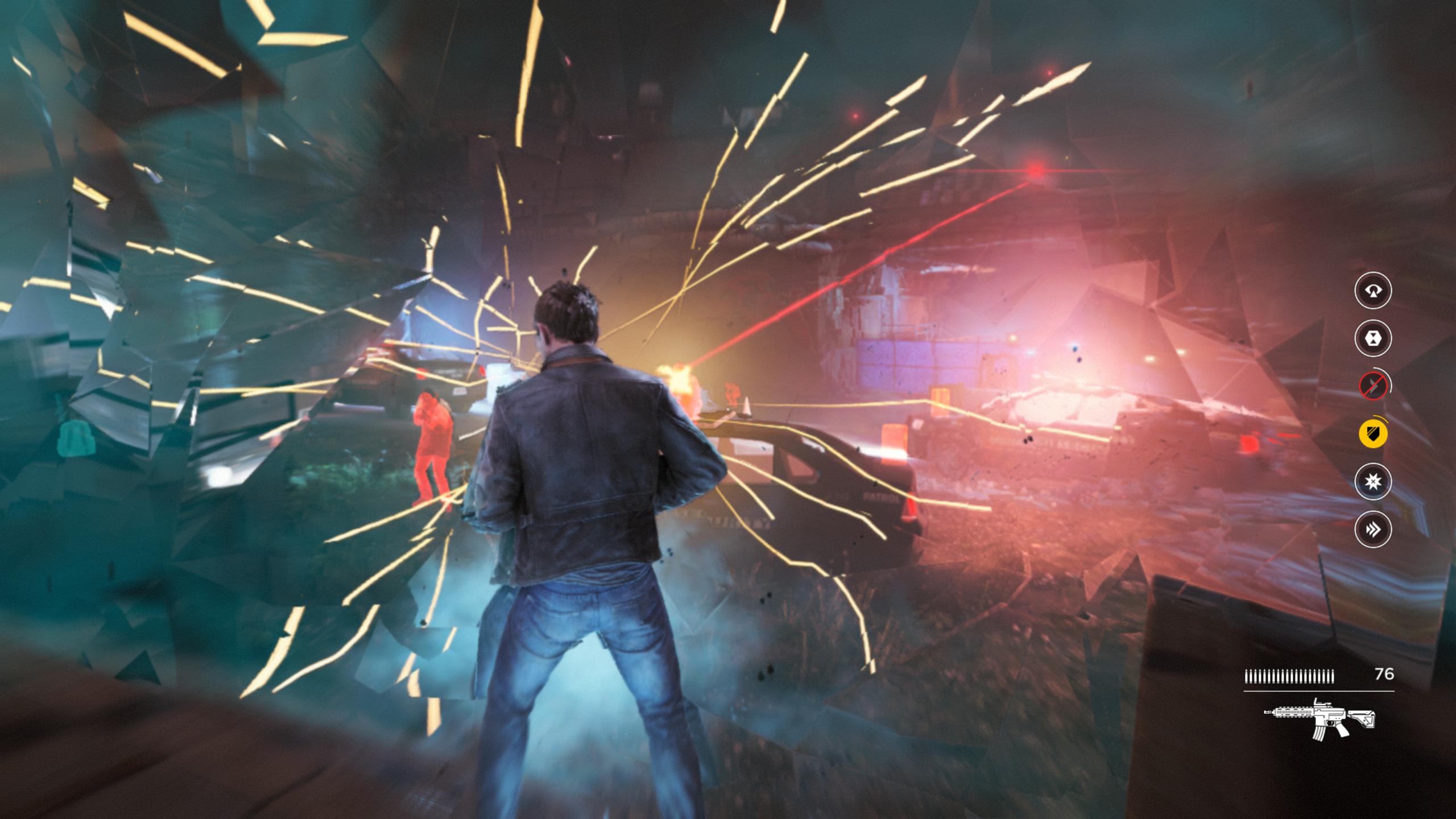 Despite these promises, Remedy has already admitted it can't completely fix Quantum Break's PC problems. Some issues like the game's ugly texture pop-ins are byproducts of the Northlight engine used to power the game, and can't be fixed. "That unfortunately is a quirk of our graphics engine," said Remedy PR rep Thomas Puha. Ghosting is apparently permanent, too: "Ghosting is just a result of the temporal reconstruction. Just the way we render things," Puha admitted.

So there you have it; Quantum Break will get better, but it won't ever fully harness the power of the PC platform. It's a shame, too, because the game could have been so much more than it is now.

Hopefully Microsoft hears our frustration on the Windows 10 UWP platform loud and clear and will stop shipping broken PC ports. On the other hand, Quantum Break has been a huge success regardless of the PC port's huge problems, so there's a chance Redmond will just ignore the issues.

There was a major rounding error introduced into our refresh rate predictions on shipping. A solution to this issue is already being worked on; we expect it to be resolved in a Quantum Break Title Update launching in the near future.

Remedy is looking into how to improve the overall performance of the game. Part of that is working closely with AMD and NVIDIA to address issues and improve the gameplay experience.

Sometimes, after a longer play session, the game can end up to a state where the video memory becomes fragmented, and an important asset gets moved to system memory, which slows the rendering performance significantly. This problem is very rare and Remedy will continue to investigate and improve the video memory behavior in future updates.

If you experience this issue, exiting and restarting Quantum Break will resolve this issue for now. This is one way to identify if you have encountered this issue or if it's another potential problem.

Keep in mind, these drivers might have an impact on other software on your computer.

In May, Microsoft will be enabling the ability for developers to disable v-sync and adding support for G-Sync and Freesync monitors. This means that UWP games running in full screen, borderless windowed mode will have all of the performance advantages of traditional full screen exclusive mode.

No Option to Quit from Main Menu

We hear you! By popular demand, we are adding an exit option to the main menu in an upcoming title update. For now, similar to all Windows 10 apps, you will need to use Alt-F4 or move the mouse cursor to top right corner of the window to the see the X icon, which you can click to exit the game.

We have been able to repro at least one reason for a rare crash on launch- with some SIMD instructions that require SSE4.1. We are working on fixing that in a future title update, and will fix any other issues we find as they are reported.

We are working on giving users more control to turn on and off features like film grain. We love the artistic choice for our game, but we also want to give PC gamers more choice and this will come in a future update.

Does Quantum Break support SLI or other multi-GPU solutions?

Quantum Break on Windows 10 unfortunately doesn't support DirectX12 multi-GPU rendering. Due to the engine architecture, the work needed to support multiple GPUs would have been significant and out of scope for Remedy for Quantum Break.

Render technique and resolution on Windows 10

The Windows 10 version of Quantum Break uses the same reconstruction method as on Xbox One. If your resolution is set to 1080p, the game temporally reconstructs the image (except UI) from four 720p buffers rendered with 4xMSAA, just like on Xbox One. Engine assigns input geometry samples from 4xMSAA rendering into shaded clusters in order to maximize covered geometry while keeping the performance on acceptable level by reducing expensive shaded samples. When you change the resolution, the buffers used to construct the image are always 2/3rds of the set resolution, i.e. in 2560x1440 they would be 1706x960.

We are aware some users are having issues downloading the game from the Windows Store. There are some known bugs with the way the progress bar is rendered. Microsoft is standing by to help anyone who has issues downloading and the Windows 10 Anniversary Update this summer will massively improve the overall experience for these kinds of big games.

This is a known issue. A permanent fix is being introduced in the next Title Update in the near future. For now, the problem can be resolved by exiting and re-launching the game.

This is an artistic choice from Remedy Entertainment. We wanted a cinematic look for our game and "film grain" is part of that look. Depending on the brand of TV you use or if your Xbox One is connected to a monitor, the film grain can look very different. Always use "Game Mode" on your television if such a feature exists. Make sure you adjust your sharpness setting down on your monitor or TV as well as the brightness setting in Quantum Break."

While atmosphere is an important part of Quantum Break, we decided to not include subtitles for ambient sound (e.g.- in-game radio broadcasts) to ensure those subtitles did not conflict or overlap with the subtitles for actual character dialogue. 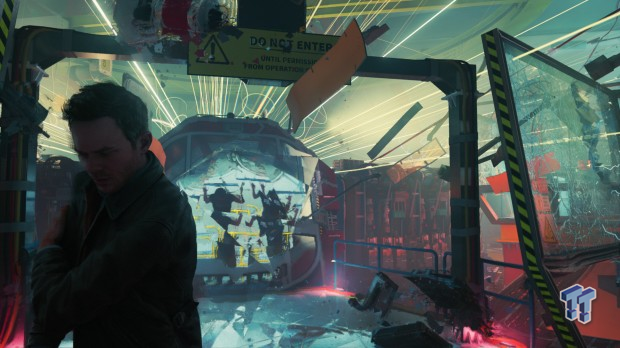