Huawei might be a relative newcomer in the US given their presence is only just recently more popular due to their design-win with Google and the Nexus 6P, but they're actually one of the largest phone makers in the world and are making more waves with the announcement of their newest phones at an event in London, the P9 and P9 Plus.

These new phones are being targeted squarely at the high-end market, and have the specs to match. The P9 has a 5.2-inch screen, a Leica partnered 12-megapixel camera, 3,000mAh battery, USB-C port for connectivity, 3GB of RAM, and the company's own octa-core Kirin 995 processor inside of a very nice looking aluminum body. The P9 Plus has all of the above except has a much larger 3,400mAh battery, 4GB of RAM and a 5.5-inch screen instead. Both of them will have a fingerprint sensor located on the back of the chassis.

The most interesting spec is the camera, even though the resolution is rather normal at 12-megapixels, it's the partnership with Leica that means it could potentially be a powerhouse of a secondary, or dare I say, primary photo-taking device. There's a second 12-megapixel monochrome sensor that's supposed to be able to improve contrast within photos, and likely add a few more levels of dynamic range by tripling the amount of light that the whole camera can take in.

The P9 and P9 Plus will have quite a few different colors with the P9 itself available in ceramic white, haze gold, rose gold, titanium gray, mystic silver and prestige gold. The P9 Plus will be available in ceramic white, titanium gray, haze gold and rose gold. This phone is one for many different markets with a total of 18 different LTE bands. It's not currently planned to hit the US, though that could change at the drop of a coin, especially with the Nexus 6P being such a success. 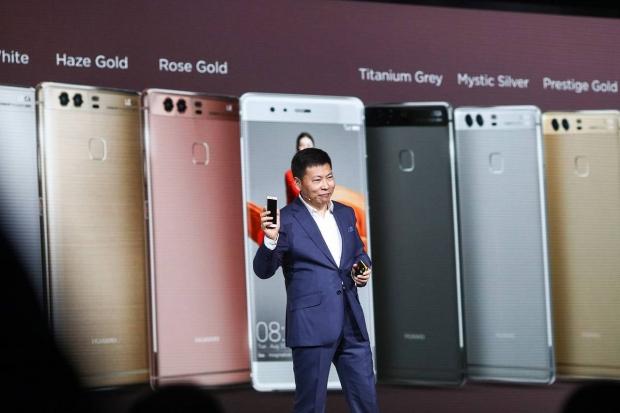