GDC 2016 - Sony had a killer Game Developers Conference, announcing the $399 price on the PlayStation VR for the PS4, but what did Microsoft have? Well, nothing in the form of new hardware announcements - but the company did just drop the price on the Xbox One to $299 for a "limited time". 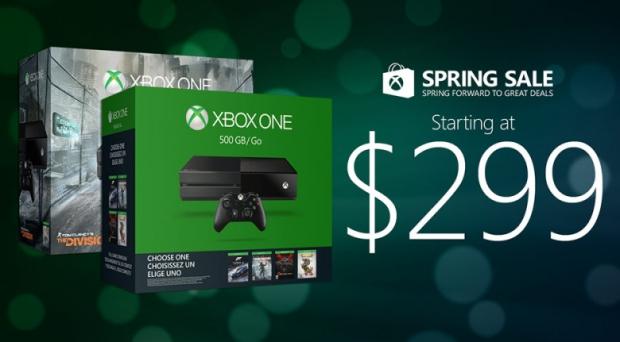 The normal price on the Xbox One is $349, with the $50 discount applied for now - but there's no news on if, or when the price will bounce back up to its original price. The discounted Xbox One pricing will include all of the current console bundles at participating retailers across the US.

Not only that, but the Xbox Spring Sale promotional event will also see discounts on a bunch of digital games on PC, Xbox One and Xbox 360 backwards compatible titles. This will kick off on March 22, two days after the Xbox One price was cut, where gamers can grab their game of choice and "save up to 40 to 60 percent off, with some at more than 60 percent off".

There will be over 150 discounted items in the Xbox Store for Xbox Live Silver & Gold users, but there's no list provided by Microsoft just yet. There are teases of Call of Duty: Black Ops 3, Halo 5, Far Cry Primal and Fallout 4.

Microsoft is also kicking off big discounts on the price of movies and TV content on the Microsoft Store, so if you're not an Xbox Live Gold member, you'll still enjoy 10% off on games by joining Gold.

Do you think this is enough to fight Sony's marketing hype train for PSVR?