GDC 2016 - ZOTAC unveiled their MAGNUS EN980 gaming PC leading up to the Game Developers Conference, but the company had it in the flesh in the Valve suite at the show.

We got some hands-on time with the not-yet-finished prototype, so there will be some changes before it is final. Inside, there's a sixth-generation Intel Core i5 processor, an NVIDIA GeForce GTX 980 (the full desktop version, the same one that was shrunken down late last year for gaming notebooks) and much more.

ZOTAC is providing support for up to four displays thanks to the GTX 980, and is pushing it for VR gaming. The MAGNUS EN980 also features dual Gigabit ethernet, USB 3.1 Type-C connectivity and a super-small footprint that would fit perfectly in your living room, or for gamers on-the-go.

The company is hoping to price it at around $1500 (this could move a few hundred dollars either way) - but you're getting quite a good deal on your hands here considering the horsepower and physical size of it. 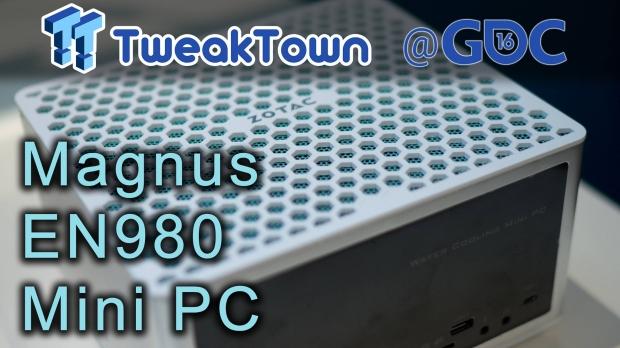