GDC 2016 - NVIDIA was displaying various VR demos at the Game Developers Conference this year, where we got to step onto the dangerously real Everest VR demo.

In the demo, NVIDIA is using their latest version of GameWorks with PhysX on top - and while it might sound like much, the additional immersion and presence that is provided is well worth it. The use of PhysX in Everest VR sees snowflakes and snow floating around at the top of the mountain, so that when you look up, you can see snow floating around - which for me, created an entire new layer of presence.

As my viewpoint was going up the mountain, I looked to the absolute peak of Everest where I could see the great use of PhysX in Everest VR. I'm not someone who would normally be sitting here bragging up PhysX, but if you ever had doubts of NVIDIA's PhysX, then Everest VR with PhysX will change your mind. It created something that Oculus, HTC and Valve have been saying since introducing VR headsets - a huge layer of presence. 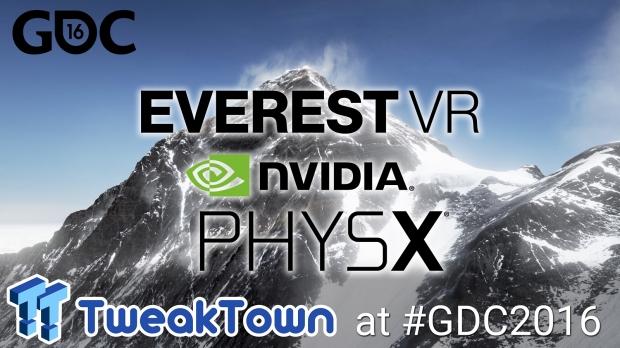