AMD's upcoming Zen architecture is exciting on its own, but what about the Opteron line of processors? According to the latest slides used by Liviu Valsan, a Computer Engineer with CERN, the Zen-based Opteron is going to be a beast. 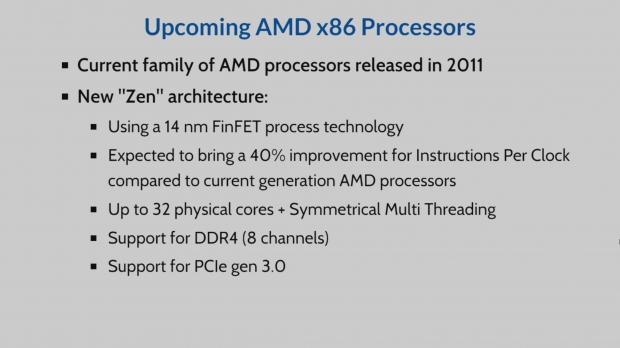 The slide teases that the Zen-based Opteron would be made on the 14nm process, "expected to bring a 40% improvement for Instructions Per Clock compared to current generation AMD processors", and a huge 32 physical cores. We should also see 8-channel DDR4 support, up from the quad-channel DDR4 on enthusiast platforms from Intel.

With AMD offering its Zen-based Opteron with up to 32 CPU cores, it means the company can scale right down to SKUs with 8, 16, and 24 cores, too. This means on the consumer desktop platform, AMD will have 8-core FX series CPUs, but it would be nice to see 16-core processors based on Zen, too.