We know that the Galaxy S7 will be unveiled in just a couple of weeks time, but now we have confirmation that LG will be launching its G5 smartphone on February 21.

The news comes directly from LG, which posted a huge tease on their Twitter page with a picture of a person pretending to hold a smartphone with the number '5' in the middle. LG also said: "#LGG5, February 21st. #MWC16". When it comes to the G5 itself, we should expect a totally new design - that has me super excited.

I reached out to my good friend Anshel Sag of Moor Insights & Strategy, who had the following to say when it comes to the mysterious slot on the G5: "The purported expansion slot is a very interesting idea that will very likely harness the power and flexibility if USB Type-C which allows for more power and data than ever before. It also should give the LG G5 something to differentiate with and I think one of those accessories will be a VR headset of some sort. Expect to see LOTs of VR at MWC this year. LG has tried it in the past, but put almost no effort behind it. However, I expect it to be Google Cardboard-based rather than like GearVR". 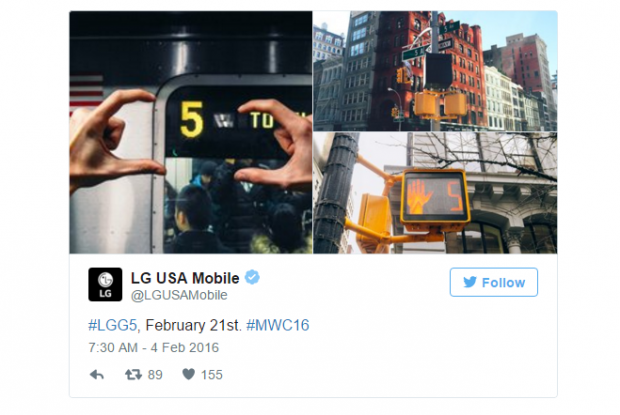