In a bid to challenge Steam's long-standing reign, EA has introduced its acclaimed all-you-can-play games service to the PC market. 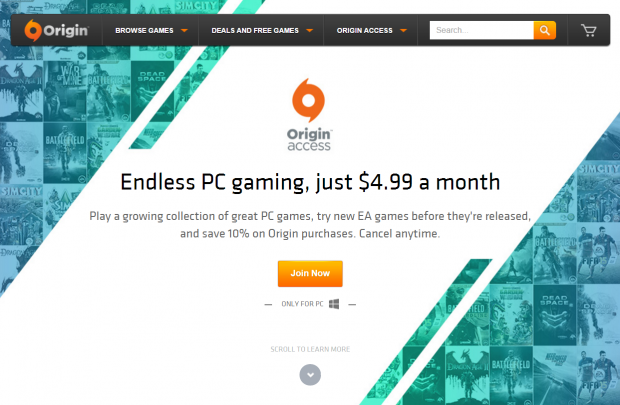 The PC flavor of EA Access is called Origin Access, and comes with the same benefits as the Xbox One service: unlimited access to a smattering of games in the EA Vault, exclusive trials and beta tests to upcoming EA games, and 10% off purchases on Origin.While the two services look quite similar, the PC version actually has an edge: Origin Access isn't just limited to EA's Xbox One games, so you can expect a ton of third-party games to fill out the PC Vault's library.

Origin Access on PC will cost $4.99 a month, which equates to $60 a year--double that of the Xbox One's $30 annual membership rate. Obviously, you can expect to see more games on Origin Access, so the value is still there. Plus, you're not locked into a commitment on the PC version, so you can cancel anytime.

Remember that EA/Origin Access isn't a games streaming service like PlayStation Now. You'll need to fully download each game--and on consoles, this can be extremely tedious with the 500GB stock hard drives--in order to play them. If your subscription expires, you'll lose access to the downloaded games just like PlayStation Plus.

If you're wondering which games are included in the Vault, we have a handy list of the 15 games you'll get access to with your $4.99/month membership: