There is quite a lot of excitement in the air over AMD's upcoming Zen architecture, but according to the latest rumors, AMD is preparing to launch it sooner than previous reported - as soon as March 2016. 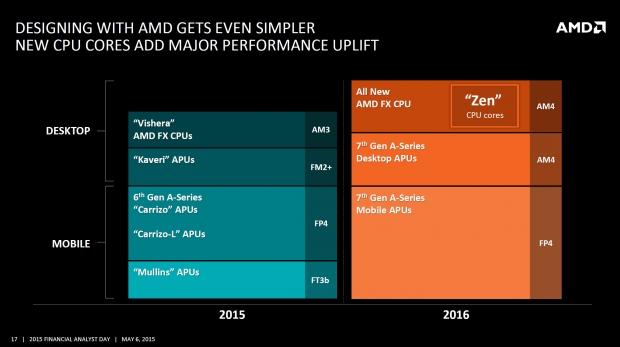 The rumor is coming from Planet3DNow, which said AMD would launch the new flagship AM4 platform in March, much earlier than the previous release window of Q4 2016. The new Zen CPU would run on the AM4 platform, which will support both APUs and CPUs. Better yet, the new AM4 platform will reportedly last much longer than previous platforms, promising support for future AMD processors. The source of Planet3DNow said that "The internal timetable foresees a March 2016 launch".

Furthermore, the new AM4 platform will bring support for Bristol Ridge and Summit Ridge platforms, with the Summit Ridge range being the performance desktop processors under the FX branding on the Zen architecture. The Bristol Ridge range will be the mainstream/desktop mobility APU range, based on the Excavator architecture. Summit Ridge will be powered by the smaller, more power efficient 14nm process with up to 8 x CPU cores while the Bristol Ridge APUs will be made on the current 28nm process as quad-core processors. Both offerings will come in at 95W, while the APU will include GCN GPU cores, and the Summit Ridge offering featuring CPU cores only.