After months and months of waiting, Fallout 4 is finally here. As with any massively open world created by Bethesda, Fallout 4's Commonwealth can be daunting in its scope. Fallout 4 is truly titanic in nearly every way and sometimes that can be pretty intimidating, especially when it's all brand new. Fear not, brave traveler! TweakTown has you covered. You can use our handy tips and hints guide to help point you towards the path of wasteland mastery. 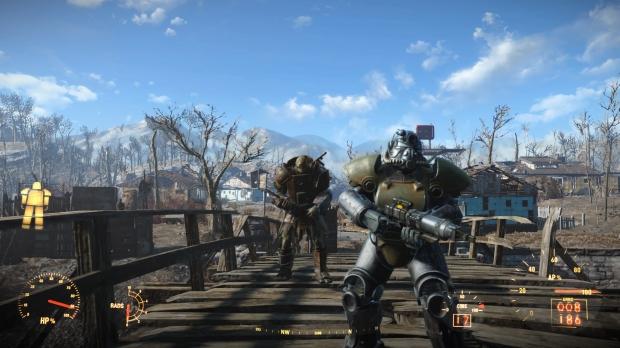 Pace yourself with Perks, be mindful of SPECIAL

One of the most important tips I can give you is to be totally mindful of how Perks and SPECIAL stats work. Fallout 4 makes some key changes to character progression, and some SPECIAL stats are more weighted than they used to be. All of them are important, but some of them have a more dramatic effect on earlier levels. In this section, I'll tell you what kinds of things you want to shoot toward depending on your style of play.

You don't have to have your character completely planned out from step one. Don't get yourself in a tizzy looking at all the perks and trying to maximize and plot out every aspect of your progression. This should be a more fluid, natural experience. That being said you need to have a general idea of what you want to do in the game. I've come to find that Agility is really important, so don't neglect it. Action Points determine the max sprinting rate, melee attacks, VATS and sneaking efficiency, which are pretty universal.

Don't pick a stat because you like the Perks that unlock later down the line. You can always train a SPECIAL stat and build it up again, so be sure to look at the more immediate Perk unlocks instead of totally planning for the future. Pace yourself a bit. A good portion of these higher-tier Perks also have level requirements attached to them. 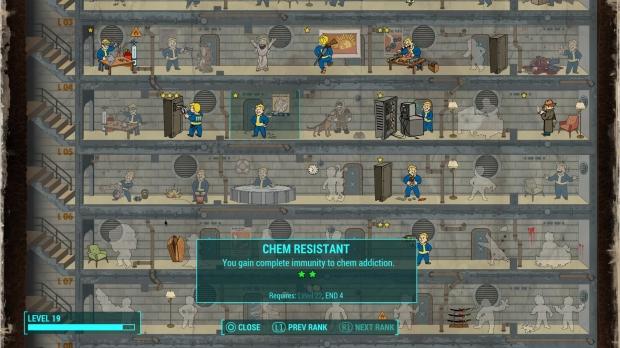 As for what Perks you should get right off the bat, Lockpicking is universally helpful. I don't push towards Hacking so much, but you do want to get at least Advanced level. Lockpicking is definitely a Master. The Awareness Perk is super helpful as it lets you see elemental strengths and weaknesses on enemies, but that can be found online. Medic is great, get a point in that at least.

Chem Resistant is super handy because you'll want to use chems in Fallout 4. Also, I've seen people say that Lead Belly is a good Perk, but don't get it. You can cook meat and food you get from common baddies like Radroaches and Bloatflies at cooking shops, and cooked food doesn't have any radiation attached to it.

Also don't bother with RAD resist perks; you can just slap on a Hazmat Suit to get some insane resistances. Or inject RAD Away, use some Rad-X, or even eat cooked Mutant Hound Chops, which remove -50 points of radiation.

When it comes to crafting, pick the Perks for the weapon style you use most. If you're melee, go Blacksmith; if you're a shooter, go with Gun Nut. Armorer is a must, as is Science. I strongly advise going with Chemist, too, as your chems will start having a strong effect. But don't get Chemist unless you get Chem Resistant. Local Leader is good if you want to be able to make high-level extras for your settlement. We won't go into the more insane high-level perks this time around.

Sleeping in a bed not only refills your health completely, but it awards you with the Well Rested modifier. So if you just sleep for a single hour every time you visit your settlement or see an unclaimed bed, you'll boost your EXP intake by 10%. Not too bad for waiting a few seconds, eh? 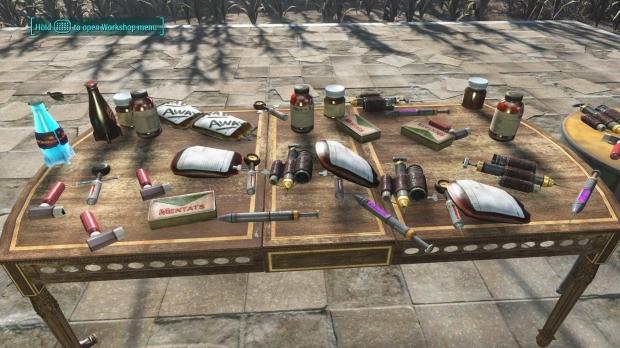 Chems are one of your biggest assets in Fallout 4. I can't say this enough: do not neglect chems. Cook them, use them, and don't be afraid to abuse them. With the right ingredients, you can make any kinds of chems, from healing Stimpaks to the ultra-useful RadAway. You can even cross-breed and mix chems to make things like Buffjet, Psycho Jet and Psychobuff. If you snag the Chemist Perk your chems will get even more potent, plus you'll be able to cook up Fury to boost your melee attacks by 50%, raise Perception by 5 points, and add 25 damage resistance for 8 minutes. Overdrive is just as incredible; it adds 25% damage and 25% critical chance for 8 minutes.

Don't worry about getting addicted. You can use a cooking station to make a Refreshing Beverage, which will remove all addictions. Or you can just stop by Diamond City and get cured that way. If you don't have a chem station built at your house in Sanctuary, the closest chem station is at the Red Rocket Truck Stop.

Chems let you stack up insane damage modifiers and can be used in tandem with food to deliver some amazing results. They are a valuable asset to any character and are worth using. The only caveat is that the higher level chems require basic chems for a base...but the Commonwealth is bristling with addictive substance so you shouldn't run out anytime soon. 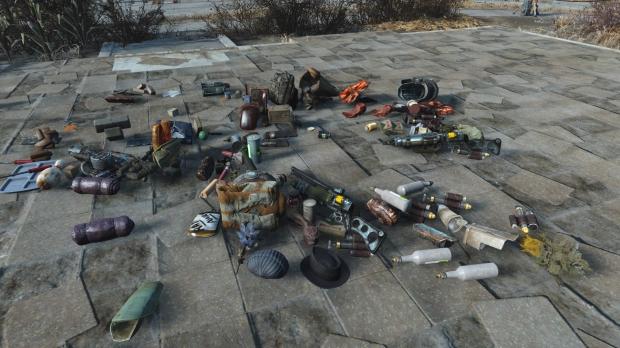 You can break down everything in Fallout 4 and render it into crafting materials. These materials can be scarce, and you'll be using the raw materials for a number of different things, from weapon crafting to making walls and prefab metal buildings in the workshop. Naturally this means you're going to need a ton of mats.

While your scavenging typewriters, fire extinguishers and toasters, you can fill up on carry weight pretty fast. Luckily, the game gives you many options to help tack on some weight. What you want to do is use an armor station to deck out your entire set of gear with the Pocketed or Deep Pocketed mod. This will add a decent amount of carry capacity to your character.

You can also chew some Buffout or Bufftats to temporarily raise Strength up by 2 or 3 points respectively. Another option is to eat some Grilled Ragstag meat, which reduces your carry weight by -25 points. If you ever see Ragstag Does, you want to take them out and grab their meat--it's tremendously useful. The more you can carry, the more you can salvage, and the more gear you can augment and modify.

Speaking of scavenging, the Scrapper Perk can pay off dividends. We know that the Perk Chart has a ton of choices to offer, but copper is kind of hard to get in the Wasteland. This perk adds a chance to snag it when you're breaking down weapons and armor. 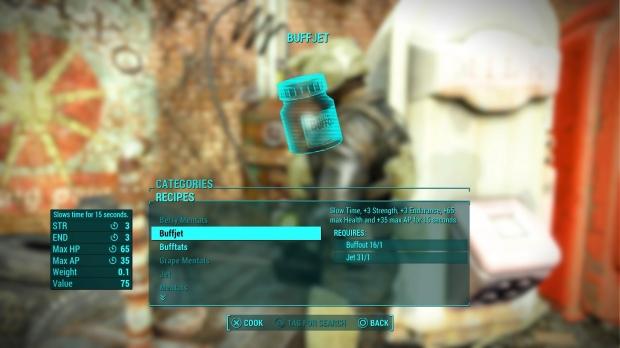 This concludes the first chapter in our Fallout 4 Wasteland Survival Guide series. Be sure to keep an eye out for more tips and tricks in the future, and we hope that these hints will help improve your experience in the Commonwealth.If you want even more Fallout 4 tips, be sure to check out our official Fallout 4 review for a more comprehensive breakdown of the game's complex moving parts. You'll also find screenshots and gameplay footage in the review to boot.

If you have tips of your own be sure to share them in the comments section below. Happy hunting, Vault survivors!