LG has just unveiled its latest smartphone, the V10, which is the company's new premium 'V' line of handsets. The V10 is the first of LG's new 'V' line of smartphones, which loses the plastic feel for premium materials, and that's just scratching the surface.

The V10 looks like the G4 from the outside, but you'd be wrong to think that. We have the same 3000mAh removable battery, Qualcomm Snapdragon 808 processor, and 16-megapixel rear-facing camera that are found in the G4, but we have 4GB of RAM versus the 3GB in the G4. The V10 has a flat 5.7-inch QHD display with an 'always-on' screen at the top that looks like it could be useful.

There are some other drastic changes up front, with LG offering two 5-megapixel front-facing cameras. One of them is different, with a much wider 120-degree field of view, with the second one snapping at 80 degrees. LG's software will use both of the cameras to take one larger image if you wanted to get a bunch of your friends in for that super-wide selfie.

One of the more unique features on the V10, apart from its dual front-facing cameras and second display, is the fact that the 16-megapixel rear-facing camera can shoot video in HD, FHD, UHD and even 21:9 aspect ratio. LG says that it wants to see the V10 do "for video what the G4 did for photographs". 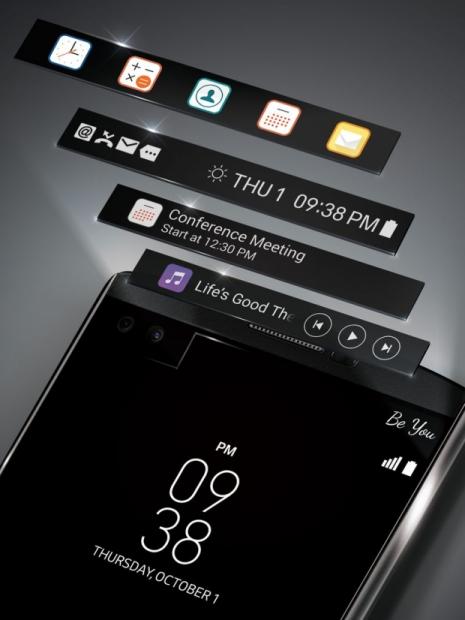 LG will be making the new V10 smartphone available in South Korea later this month, with the United States, China and other regions receiving it soon after. No pricing has been announced just yet, but it will arrive in a single 64GB variant with expandable storage.