Microsoft has inadvertently outed its new flagship Windows Phone duo in a new listing on the UK's Microsoft Store, confirming a few leaked specifications in the process. 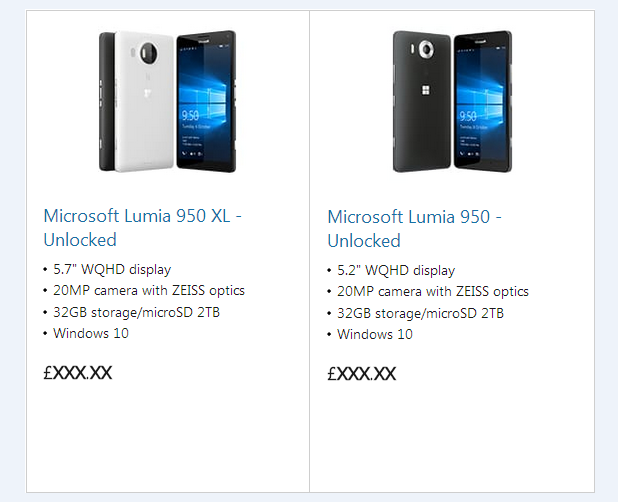 According to the listings, the Lumia 950 XL will sport a 5.7-inch 2560x1440 WQHD display, a beefy 20MP camera fitted with Zeiss optics, 32GB of onboard memory with support of up to 2TB of expandable microSD memory, and will run Windows 10. The Lumia 950 is almost exactly the same as the 950XL, except the second-tier model sports a smaller 5.2-inch QHD screen and doesn't have the triple-LED flash found in the 950 XL's camera.

Leaked specs suggest that both phones will have USB Type-C for rapid charging, display, and data transfers as well as Qi wireless charging support.

The Lumia refresh represents Microsoft's own entry into the current gen smartphone war, taking on Apple's iPhone 6S and 6S Plus and Google's new Nexus 5X and Nexus 6P lineup.

The listings are incomplete and don't link to an actual product page, leading us to believe this was a mistake (or a strategic confirmation) on Microsoft's part. No pricing or availability is mentiong for the Lumia duo, and the Redmond tech giant is expected to unveil both models during its Windows 10 event on October 6.