It might be the introduction of high performance unlocked K-series mobile processors from Intel, but EVGA has decided to enter the gaming notebook market. At IDF, Intel hinted that EVGA would be bringing a gaming notebook to market featuring a new Skylake mobile CPU. 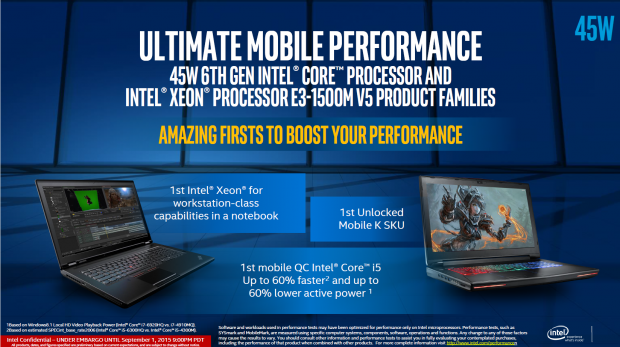 EVGA is traditionally known for their aftermarket video cards and motherboards, and they have a large following of enthusiasts and gamers who want the best hardware in their computers. I contacted our EVGA representative to get more information or even confirmation. According to EVGA marketing, "[EVGA] are working on a new 17-inch thin gaming notebook with very high-end hardware. Plan to launch late this year/early next. 100% EVGA design from the ground up".

EVGA is known for their NVIDIA-based GPUs and Intel-based motherboards, so we should expect an Intel CPU and the possibility of a discrete mobile GPU from NVIDIA. We could even go as far as to expect Intel's first K-SKU mobile CPU in EVGA's gaming notebook, but at this time there is no solid confirmation of what hardware will be used in their gaming notebook.

If EVGA uses Intel's unlocked (K-Series) mobile Skylake CPU it would be the 4 core/8 thread i7-6820HK which has a stock clock of 3.2GHz with a 3.6GHz turbo and a 45W TDP. EVGA did mention that the gaming notebook would be thin, which might point towards less macho cooling, but Skylake has very good power/performance envelope and the increased power from overclocking is minimal compared to previous generation CPUs with the same high percentage overclocks. 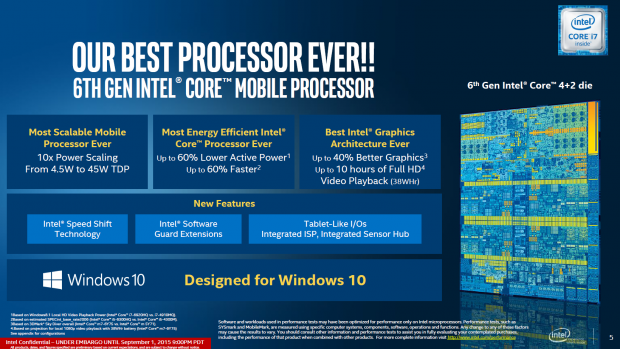 While the CPU might also be one of Intel's 28W SKUs which feature Intel's new Iris Graphics 550, I can't help but think that it isn't a coincidence that Intel launches their first ever mobile Xeon and K-SKU CPUs while EVGA is entering the gaming notebook market. Needless to say with the wide variety of Skylake mobile processors, extreme power and performance scaling of the Skylake microarchitecture, a new integrated ISP (image signal processor), and extreme power savings with Speed-Shift technology and Windows 10 there will be some pretty powerful gaming notebooks coming out soon . Toss in an i7-6820HK, a GTX 980M, and a RealSense camera and you could have a very powerful gaming notebook with some pretty awesome gaming capabilities on your hands.