Naughty Dog has announced the release date of Uncharted 4: A Thief's End on the PlayStation 4, with the last game in the series arriving on March 18, 2016. 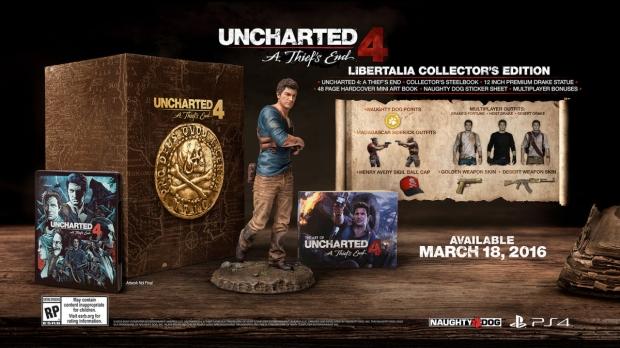 Uncharted 4 will arrive in a few different versions, with the Special Edition pre-order including a steelbook case, an art book, in-game currency, a sticker sheet and the game itself on a Blu-ray for $80. If you want to kick over $120 for the Collector's Edition, it will include everything that the Special Edition comes with, but with a 12-inch statue of Nathan Drake from Gentle Giant, three in-game multiplayer outfits, two weapons skins, and other in-game customization options.

There will also be DLC packs for Uncharted 4, with the first two DLC packs being multiplayer packs with rare and legendary items while the third DLC pack is "the first ever, single-player story add-on for the Uncharted series".